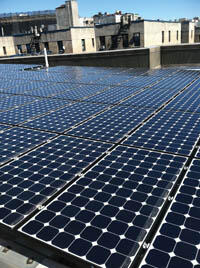 "It’s Embarrassing How Much Money We Save": An Everyday Co-op Goes Solar

Installing solar panels on the roof of your co-op or condo isn't the easiest thing to do. The New York City permitting process can be cumbersome, and not all buildings are good candidates. A property must have a large roof in good condition and, above all, gets ample sun: A building with too much shade will not get enough sunlight to generate energy.

Then there are the financials. If a building is structured as a 501(c)(3) nonprofit, it won't benefit from some of the tax incentives. And since most of the financial incentives come in the form of a rebate, a building's owners need to either have enough cash to pay for the project up front or be able to qualify for a loan. 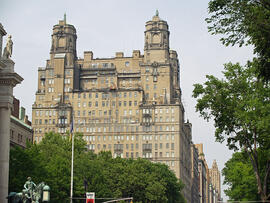 Co-op / Condo News: A Seinfeldian "No Hot Dogs for You!" and More

The Beresford, The Riviera, Manhattan

The Beresford, The Riviera, Manhattan

Recent news affecting co-op / condo buyers, sellers, boards and residents. This week, The Beresford, where Jerry Seinfeld lives, goes after a sidewalk hot dog vendor. Hey, don't let the fact that the city and the police both say he's legal — you just keep on fighting the good fight against nitrates! The FHA is relaxing condominium-certification rules, making it easier to get mortgages. And just in time: New York City condo prices are jumping. Meanwhile, for co-op / condo boards, there's a new resource for tree guards, and an old lesson for Law & Order fans: Don't mess with Lt. Van Buren! On Beyond Solar: Lowering Energy Costs by Creating a Comprehensive Plan

The River Arts cooperative in Manhattan's Washington Heights has saved $15,000 a year in electricity costs since installing rooftop solar panels two years ago — an installation  partly funded by government incentives. River Arts financed the $418,000 project with a federal tax credit, a grant from the New York State Energy Research and Development Authority (NYSERDA), and a city property tax abatement. In all, the credits and grants reduced their final bill to $34,560. Initially, the board estimated it would take eight to ten years to pay back the investment. Instead, it took only three.

Nevertheless, River Arts' costs have gone up by 15 percent because of rising property taxes and skyrocketing fuel costs. Property taxes cost the complex $1 million in 2012, up from $300,000 in 2005. In 2015, when the city phases out No. 6 oil, the co-op will have to use a cleaner, but costlier, fuel.

The co-op has taken many steps to lower costs. When it replaced the lighting in the communal areas with energy-efficient fixtures, it took advantage of a $15,000 NYSERDA grant that brought the price down from $51,000 to $36,000. It took the co-op two years to pay.