A little-known pot of money helps a co-op switch from oil to gas. 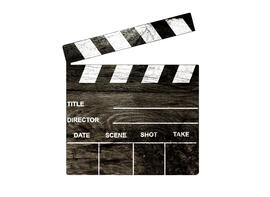 Is Your Building Ready For Its Closeup?

Angelina Jolie was in trouble. The apartment had just exploded, the windows blown out into the street. The movie megastar crept along the outside ledge of the building before sneaking into a neighboring apartment, then sprinting out through the lobby to safety on the street. 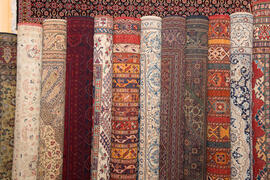 Can You Clean Your Carpet and Be Courteous at the Same Time? (Yes)

Usually, when the subject of carpets at co-ops comes up, it's regarding a noise complaint and the 80 percent carpet rule. But in this week's Ask Real Estate column in The New York Times, Ronda Kaysen fielded a different type of carpet-related question. Someone in Washington Heights asks, "Does New York City have any rules or regulations about shaking rugs out a window, or beating them in a courtyard? Could a co-op board object to the behavior?" Kaysen gets imput from Dov Treiman, a Manhattan real estate lawyer, who explains that the city has no laws about cleaning rugs. "But," he cautions, "if your co-op board decides that shareholders should not be slinging carpets out their windows, it might be able to adopt a rule banning the practice. It would depend on whether the building’s governing documents allow the board to change building rules. Check your proprietary lease and house rules to see if a restriction already exists." Kaysen does add some good neighborly advice, however. "You might irk neighbors living below you (or mingling in the courtyard) who would not appreciate a shower of dust raining down from above. So perhaps you should consider a less dusty alternative for your carpets, like steam cleaning," she writes. Remember, courtesy costs nothing and goes a long way to keeping the entire co-op community happy.

It may seem like a really sketchy, not to mention frustrating, game of bait-and-switch, but it's simply New York City real estate. Yet another developer, after proposing a shorter apartment building, wants to build one twice as tall. Yet again, locals are saying no way. Where's it all going down this time? At 4452 Broadway, reports DNAinfo. HAP Investment Developers presented its revised proposal last Wednesday to Community Board 12's Land Use committee, where, not surprisingly, it was "met with opposition from residents and the local community board." According to DNAinfo, "HAP must get approval from the city’s Board of Standards and Appeals for several zoning changes, including a bid to more than double the building’s height from 80 to 162.5 feet." HAP reportedly insists that the building must be taller, because otherwise they won't make enough of a profit, you see. A representative for the developer, Frank Cheney, cites "unusual features of the lot, which is built into the side of a hill and includes the entrance to the 191st Street 1 train tunnel." Hmm, you'da thunk they would've caught that when they snapped up the property in the first place. So much for "let the buyer beware." Of course Cheney says the taller building would totally not affect the neighborhood's look, insisting that it would be approximately at the same level as the buildings behind it, "referring to some structures higher up on the Fairview Avenue hill that can be seen from Broadway." Funnily enough, the people who live in the neighborhood disagree. The neighborhood, say local opponents, is dominated by six-to-eight-story apartment buildings. You know, closer to the originally proposed seven-story structure. The full board votes on the revised proposal September 29.

Part 2: A Co-op Avoids Foreclosure. But What's to Prevent Backsliding?

After securing a low-interest from New York City's Department of Housing Preservation & Development (HPD) in 2006, the co-op board saw to installation of a new roof, boiler, elevator, and windows, as well as common-area renovation and other repairs. Now it had to start repaying that loan and back bills. And that's when the real estate market collapsed. 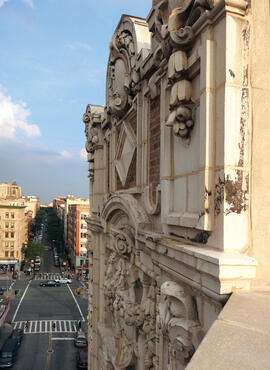 It was a prescription for disaster, with unlimited refills. The property manager at this Washington Heights co-op was also a shareholder and president of the board of directors. Family members were on the building's staff. Rent and maintenance payments in the limited-equity Housing Development Fund Corporation (HDFC) co-op were collected erratically. Capital improvements were postponed or overlooked. Taxes and water bills went unpaid.

Although few shareholders knew it, their building was fast approaching foreclosure.

Nigen and Yvonne Vosper lived at 555 W. 160th Street in Manhattan on December 24, 2008, when Nigen slipped and fell on ice as he was leaving the building at 7:55 a.m. Note the time, because it becomes important. The following month, he filed a lawsuit for personal injuries, alleging that the building had "created a dangerous and hazardous condition on [the] outside landing by removing a step that was there and replacing it with a downward sloping landing, without a handrail."

The Energy-Benchmarking Grades Are Out. Do They Really Matter?

Under Local Law 84 of 2009, large buildings must record and keep track of their energy and water use — and then the city posts the results for all to see. The letter grades are linked to a numerical score called the Energy Use Intensity (EUI), which measures the energy used by a building per square foot, per year. The median EUI for multifamily buildings in New York City is 132.1. Score a 109 or lower and you earn an A; higher than 160 is a D. But in practical terms, how well do these grades translate to real-life energy use?

Can You Ban a Problematic Real Estate Broker from Selling in Your Building?

No condominium or cooperative board wants to restrict its residents' ability to work with brokers they choose; indeed, some argue that this would be illegal restraint of trade. Yet some brokers are problematic, creating needless issues for boards to deal with, from selling apartments at cut-rate prices, lowering all residents' equity, to simply being a pest who bombards residents with unwanted e-mail. So what can a condo or co-op board do?