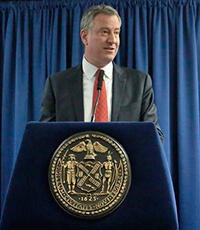 The outcry over developer Extell's greenlight to build a separate entrance for mandated affordable apartments at 40 Riverside Blvd. has reached as high as Manhattan Borough President Gale Brewer and New York City Mayor Bill de Blasio. "The two-door system is an affront to New Yorkers' belief in fairness and diversity in our city we all live together," said Brewer in the New York Daily News. The Mayor agrees, saying he intends to ban so-called "poor doors" that segregate teachers, nurses, police officers, social workers and others of moderate means from bankers and lawyers — though unfortunately, not until an overall inclusionary-housing law is drafted about a year from now.

Extell's CEO, Gary Barnett, tells the paper he can't intersperse affordable and market-rate apartment and is forced economically to bunch them together. Funny — every other developer of such mixed-income housing seems to be able to do it just fine.

Politicians sounded a hue and cry when they learned developers wanted to install separate entrances — "poor doors" — for residents living in the affordable-housing part of new luxury buildings. But now one developer is getting his way regardless. The New York Post reports that the Department of Housing Preservation and Development (HPD) has approved Extell's plan for such a separate-but-equal entrance at the 33-story condominium at 40 Riverside Blvd. that the company is building on the Upper West Side.

Anything about this reek of 1950s segregation, with income instead of race? Well, as David Von Spreckelsen, senior vice president at Toll Brothers, told The Real Deal last year, “I think it’s unfair to expect very high-income homeowners who paid a fortune to live in their building to have to be in the same boat as low-income renters...." Yes, because all those nurses, teachers, police officers, writers and small-business owners are all scum of the Earth, unfit to use the same lobby as lawyers, bankers and, evidently, real-estate company senior vice presidents.

Children being turned away from playrooms, seniors denied use of the gym and developer Extell's infamous "poor door" at 40 Riverside Boulevard: Such refusal of amenities to rent-stabilized and subsidized residents in some high-end co-ops, condos and rental buildings are prompting legislators to seek laws preventing such practices. Ronda Kaysen's eye-opening article in The New York Times reports on several cases, which critics say divides communities and turns average working people, from teachers to entertainers to retirees, into pariahs in their own homes. What do advocates say? According to the head of one development company it's because such people may — may — bring down property values. How exactly a police officer, nurse, social worker or graphic designer brings down property values, nobody is saying.