The century-old Belnord will be the neighborhood’s second priciest condo.

Converting from Oil to Gas? Take a Number and Get In Line

For president Eric Walsh and other members of the activist board at 252 West 85th Street, a 10-story co-op, it was a double play: by converting the building’s heating system from oil to gas, the board could not only save energy, it could also free up space, possibly for a gym or a meeting room.

For Peter Varsalona, a partner in RAND Engineering & Architecture, the relatively straightforward job of converting the heating system ended up as a waiting game with Con Ed. Approval by the utility for the conversion would be the culmination of a 16-month adventure to cut energy costs and add an amenity. “It takes a very long time for a building to get gas service in these conversions,” Varsalona says. “You pretty much have to do everything and then wait for Con Ed.” 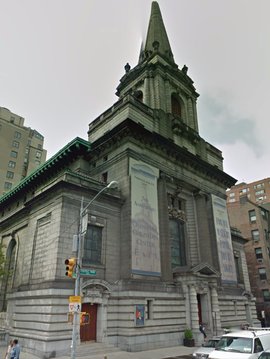 A long-delayed plan to turn the landmark Christian Scientist church on Central Park West into condos has been scrapped, YIMBY reports. The developer, listed as 361 Central Park West LLC, withdrew the plan to build 35 condos because of likely rejection by the Board of Standards and Appeals, which must approve waivers necessary for the conversion to proceed.

In March 2015, after weathering a lengthy approval process with the Landmarks Preservation Commission, the developer filed for the waivers on the basis of five “hardships,” including the narrow, irregular shape of the lot.

The conversion plan faced vocal community opposition, and attorney Michael Hiller, representing the Central Park West Neighbors Association, called the hardship application “considerable hubris.” He added, “This is a victory not only for the Upper West Side and the church’s congregation who fought valiantly to preserve the church, but for all New Yorkers who believe that our history is valuable and that landmark buildings should be preserved and protected.”

The congregation has moved to another church on West 65th Street. The CPW church was built in 1903, and its interior, which did not have landmark status, has already been gutted. The building now resides in limbo. 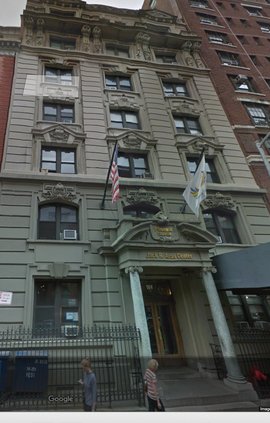 Yes, Even a Rehab Center Can Be Turned Into Luxury Condos

Synagogues are doing it. Churches and chunks of college campuses are doing it. So why shouldn’t a drug and alcohol rehab facility do it? What they’re doing, of course, is turning into luxury condos.

The latest building to join the stampede is Phoenix House at 164-166 W. 74th Street on the Upper West Side of Manhattan, a landmarked building that’s headquarters to one of the largest drug and alcohol rehab nonprofits in the country. Greystone Development and Prime Rok Real Estate bought the seven-story building last week for $26.8 million, The Real Deal reports, with plans to turn the 33,000 square feet of space into 14 luxury condos. Prices are expected to range from $2.3 million to $6.5 million for the duplex penthouse.
Architect Barry Rice has been hired to design the interior. The facade will remain unchanged since the building is in the Upper West Side/Central Park West historic district.

Phoenix House, meanwhile, will relocate operations to its other New York properties, including one at 2191 Third Avenue in East Harlem. 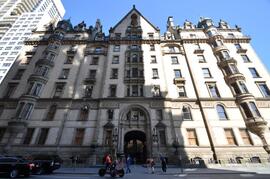 Drama at the Dakota: The Saga Continues

As nice as it would be for everyone in a cooperative to live in harmony, it's perfectly normal sometimes for people not to see eye to eye. When tense situations escalate into heated arguments, we always recommend mediation over taking conflicts to court. Why? Because lawsuits are expensive and time-consuming. Take the Dakota. Back in 2011, financier Alphonse Fletcher Jr., who has lived in the building since 1992 and served nearly a decade on its board — including two terms as president — filed a lawsuit against the Dakota after the board rejected his request to buy a three-bedroom, $5.7 million apartment adjacent to the one in which he lives. He charged that rejecting the sale was the board's way of retaliating against him for standing up for the rights of other minority and Jewish shareholders and applicants. Fast-forward to 2015, many years and lots of money later, and it looks like bad news for Fletcher. The New York Times reports that "a judge in Manhattan has dismissed a lawsuit brought by the financier against the Dakota, ruling that Mr. Fletcher had failed to provide evidence that the celebrated building's co-op board had discriminated against him because he is black." According to The Times, "Dakota board members said liquidity, not race, led them to reject" Fletcher's bid to buy the apartment. They said "in depositions that they had rejected Mr. Fletcher because he had only $50,000 in liquid assets, millions in debt and mounting losses at his businesses." Justice Eileen A. Rakower of State Supreme Court in Manhattan said "there was not enough evidence of discrimination to warrant a jury trial." And if you think it's finally over, think again. Fletcher plans to appeal the ruling. 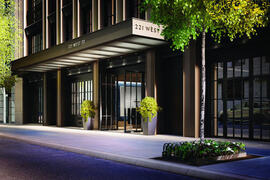 Wasn't it just a few days ago that we were talking about a 17-story condo rising in place of a garage between Broadway and West End Avenue — just outside the Upper West Side's historic district? Well, it looks like the UWS has lost another garage, this one located at 221 West 77th Street. According to Curbed, this is developer Naftali Group's second garage-to-condo conversion, and it's been in progress for some time now. "With a design by Danish architect Thomas Juul-Hansen and a selection of 26 two- to five-bedroom condos, it's not slated for occupancy until 2017, [but] its units are officially on the." How much are we talkin'? Prices range from $4 million — what a bargain — to a whopping $23 million clams. What's in it for those who buy? It looks like it's the usual suspects: fitness center, basketball court, on-site parking, and a roof deck. 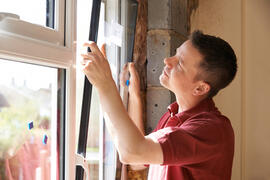 Can a Shareholder Pass on a Building-Wide Window Replacement?

This week's Ask Real Estate column in The New York Times illustrates perfectly why it's in a board's best interests to keep the lines of communication open with building residents. Arguably, a significant amount of grief can be prevented if building residents are allowed to see why boards operate the way they do and understand the types of everyday building-wide situations they constantly confront. It sounds like things are about to get tense at a co-op on the Upper West Side. One building resident there writes to Ronda Kaysen: "Our co-op board has announced a window replacement project for the entire building because some owners have difficulty operating the windows. The owners of each apartment must provide access to the windows, which means removing and reinstalling all window treatments and, in our case, custom built-in furniture around the windows. This will be costly and inconvenient…. Are we permitted to opt out of the replacement project? Our existing windows are fine." Kaysen explains that windows are a bigger deal than they may seem to this particular building resident. "When buildings want new ones," she writes back, "they invariably want to change them all for reasons of energy efficiency but also to maintain a uniform appearance. A patchwork of different window styles could look odd…. If you were to refuse to let the co-op replace the windows, the co-op could sue you, potentially leaving you on the hook for both the building's legal fees and your own." 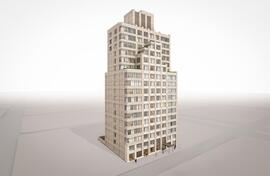 The average sales price for Manhattan condos may have slipped slightly in July, but that's not stopping them from rising all over the city. Just outside the Upper West Side's historic district, a 17-story condo building is set to rise. It replaces the garage between Broadway and West End Avenue. YIMBY, which snagged a first look at the development, reports that that 170-foot-tall building will offer 39 apartments spread across 100,194 square feet, which means average units will be approximately 2,569 square feet. As if the promise of space weren't nice enough, potential buyers will want to pay particular attention the floors 12, 13, and 14. Because the structure will be set back after the 11th floor, it will create "large private balconies for residents on the 12th, 13th and 14th floors." Nice, eh? 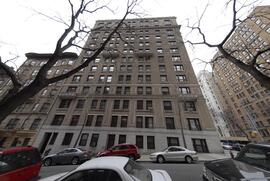 A Collection of Capital Projects at 771 West End Avenue

Freddie Rivera was concerned. The longtime super at the 73-unit co-op at 771 West End Avenue, he was supervising a major capital improvement job and noticed there was "a water leak in the oil tank room. It was on the top of the brand new oil tank; you could see the marks of the water." He immediately called the building engineer, who was already involved in the larger capital project. "They found that the support beams below the sidewalk had rusted and expanded." The engineer is currently doing probes to determine what action to take.

The rusting support beams have just been one more challenge to overcome for Rivera and the board. "This board is very hands on," observes Ellen Kornfeld, vice president and partner at the Lovett Group, the building's manager. "They like to get involved in projects." Indeed: for the last several months or so, the nine-member board at the prewar, West 97th Street building, has been supervising some expensive jobs, ranging from a $92,283 oil tank replacement to a $561,873 boiler tank conversion. 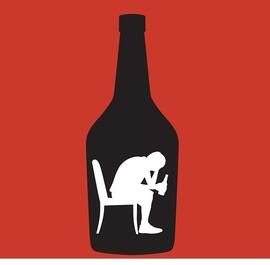 Life in a co-op is all about community. But sometimes community living can present challenges ranging from personality clashes to more serious matters, such as dealing with a super who's, well, less than super. Take this co-op in the Upper West Side, for example, which is coping with an allegedly belligerent live-in super. "[He] appears to have a drinking problem. He literally passed out, face down on the sidewalk, in front of the building early one morning. He got into a physical altercation with a vagrant in front of the building and had to be hospitalized. He verbally abuses building staff," one of its shareholders writes to Ronda Kaysen in this week's Ask Real Estate column in The New York Times. According to the shareholder, the super doesn't seem to be drinking during business hours. "But shouldn't he be coherent and alert at all times, ready to make an important decision at any time, if needed?" The co-op board doesn't want to make a move "because they think that what he does on his own time is his own business." That's quite a pickle. "A live-in super has a right to a private life," answer Kaysen. "But when he behaves in a worrisome manner in or outside the building, his personal choices become his employer's problem, because management sets the standards for workplace behavior." Furthermore, the super needs to be available in emergency situations, even if they occur in the middle of the night or any time before he starts or after he finishes his shift. The board's "cavalier attitude" is especially alarming, Kaysen points out. "[It] puts the safety of residents and other employees at risk." If the board feels firing the super is too drastic a measure, then it should certainly takes steps to improve the situation. That may mean conducting an evaluation and putting the super on probation to give him a chance to rectify his problematic behavior.