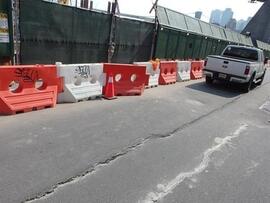 Speaking of super-tall condo towers that are causing people a lot of grief, get a load of this one. Parts of Cherry Street, located behind an active construction site, have cracked and sunk a few inches, locals say. Trever Holland, president of the tenants' association at Two Bridges Tower, told DNAinfo that residents of the affordable housing high-rise building — located adjacent to the construction site — are nervous: "if the land is sinking on Cherry [Street]," they wonder, "what is the land doing under [our building]?" What's being constructed at 250 South Street? Curbed reports that documents dated May 29, 2015 confirm the luxury tower will be condos. Those condos. Holland also told DNAinfo that "the roadway was just one of a number of construction issues facing residents of Two Bridges Tower. The sidewalk that provides the building’s access to the street has also buckled… and the pile driving at the construction site — which occurs six days a week — can be heard for blocks for several hours a day." Affordable housing community versus luxury condo development: which will win? Well, let's see what's being done to remedy the situation. DNAinfo reports: "A Department of Transportation spokesman said the agency, along with the DOB, had inspected the site last week and this week and asked Extell [the developer] to monitor the situation on a daily basis." Hmm, okay. In the meantime, residents of Two Bridges Towers "plan to address the issues with the developer at a quarterly construction meeting next month." These issues also include cracks in the walls of their apartments as well as misaligned doors and mailboxes, which the developer has reportedly promised to fix.

It was only a matter of time, really. The gritty Lower East Side was already changing by the nineties. But revitalization tends to mean gentrification and, today, condo prices are starting to soar as high as those in historically pricier neighborhoods, such as SoHo, NoLIta, and NoHo. The New York Times reports that "one of the newest condo developments to be marketed on the Lower East Side — stretching from Houston Street to the Brooklyn Bridge, and the Bowery to the East River — is 50 Clinton. Demolition to make way for the seven-story masonry building, which replaces a row of one-story shops that included the restaurant WD-50, began in May, with occupancy set for the fourth quarter of 2016." Average ticket price? Approximately $2,100 per square foot. For those keeping track, that figure is nearly double "the $1,167 average price per square foot for Lower East Side condos over the last year, and well over the $705 per square foot average price of co-ops, according to data provided by CityRealty, a real estate listings and research service." 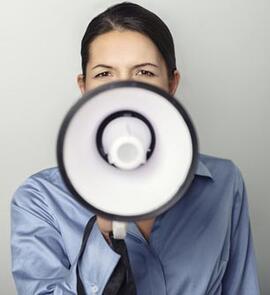 Activists Say Enough with the Poor Doors and Luxury Towers

Speaking of white-glove buildings, it looks like the "poor door" is making headlines again. According to the New York Daily News, Extell Development wants to build a 56-story luxury tower near the Manhattan Bridge, the former site of a Pathmark supermarket. Next to it would be a 13-story "poor door" building where the low-income population in the complex would live. Activists are saying hell no. The "poor door," they say, "reeks of discrimination." The Daily News reports that last Wednesday, "hundreds of Chinatown and Lower East Side residents gathered in front of the 227 Cherry St. construction site to demand that [Mayor Bill] de Blasio protect their waterfront community." They mean business, too, planning to carry on the protests on the last Wednesday of every month. They are calling on the mayor to stand by the promise he made in 2014 to end the use of the poor doors. Scheduled to be completed by 2018, the luxury tower would be located in the midst of several public housing projects — so this fight is more than just saying no to the segregation affecting the low-income population. This fight is also about a city that, according to many, doesn't seem to have its priorities in check. One activist points out that what the city needs are schools, not (more) luxury towers. And it's also about gentrification: "Luxury buildings push rents through the roof and displace low-income people; the loss of local, affordable businesses such as Pathmark also forces people out," adds another activist. For them, scrapping plans for a poor door isn't enough. They want to stop the entire development in its tracks. "We put you in office," they say to the mayor for whom affordable housing is so high on the agenda. "So we demand that you stop the Extell project!" They're mad as hell, and they're not going take it anymore. 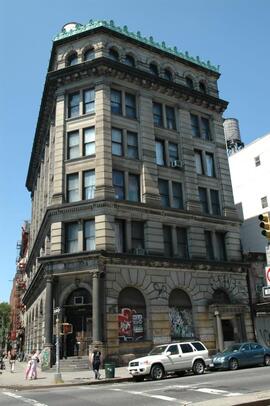 Graffiti-Covered Bowery Holdout Will Probably Be Converted to Shiny Condos

Do you remember the Bowery? Whether you view it as a former Skid Row or a long-gone hardcore punk rock heaven, its grit defined the New York City that many of us grew up knowing and loving — a New York City that has, thankfully, been captured in Taxi Driver and the French Connection. The face of the Bowery has changed a lot — gentrification has transformed it into an unrecognizable place, a place that has no room for the likes of CBGB anymore, preferring instead trendy shops, restaurants, and a Whole Foods. Many considered the neighborhood's last holdout to be 190 Bowery, that gorgeous, graffiti-covered limestone building, a former bank — in fact, the Germania Bank building — that doubled as a piece of old New York architecture and a snapshot of the Bowery that once was. For more than 40 years, that old bank was home to photographer Jay Maisel. He paid $102,000 for the building in 1966 and resisted selling for years. Last year, however, he made a deal to sell the building to developer Aby Rosen. Citing public records filed with the city late last week, the New York Daily News reported that Maisel got $55 million for it. Rosen's plans? He's put the building back on the market, but it's a safe guess that whoever snaps it up will convert the space to condos, right after the last vestiges of a now extinct neighborhood are scrubbed away for good. 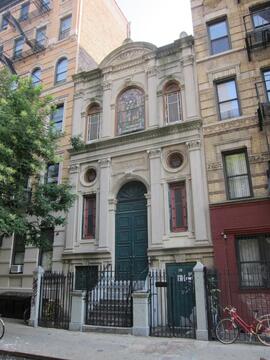 Maybe not everyone in New York is a fan of all the new condos going up, but sometimes good does come out of the inconvenience of noisy construction sites. Founded by Polish immigrants from Mezritch in 1910, the Adas Yisroel Anshe Mezritch Synagogue fell into such a state of disrepair it was forced to close its doors six months ago. But before you lament yet another piece of New York history gone, good news. The synagogue is being completely renovated and is scheduled to open its doors again this year, thanks to a new condo plan, reports the New York Daily News. The temple will remain on the ground floor, and "three luxe apartments, including one 11-foot penthouse addition, will be built upstairs" and are scheduled to hit the market this fall. Not everyone is happy about turning part of a religious building "over to for-profit real estate developers," but thanks to the controversial deal, at least the building and the shul will be preserved. According to the Daily News, East River Partners (the developer) "is also planning to pay an annual maintenance fee to keep the shul running for 200 more years." That's a pretty neat compromise.

The East River Housing co-op on the Lower East Side remains embroiled in a federal lawsuit involving three shareholders' claims that a dog brought into the no-pet complex was a medical necessity for mental-health issues. As previously covered by Habitat, New York housing courts — generally tenant-friendly — and appeals courts all consistently ruled against the shareholders, finding their requests for disability accommodation to be dubious. The courts, as also covered in Habitat, are aware that scammers have misused disability anti-discrimination laws simply because they want a dog. Here, two of the disability claims came only after the dog was discovered — and a doctor withdrew his support for the third.

Yet after losing in the courts, the shareholders, as The New York Times recently followed up, filed a complaint with the U.S. Department of Housing and Urban Development (HUD), which is now suing the co-op on their behalf. Speaking for beleaguered boards all over, East River's attorney told the paper, “The board has no problem accommodating pets. The problem is with people trying to sneak in their animals and then thinking they can pull a fast one when they get caught.”

Manhattan's East River Housing has been awarded $30,087.29 in legal fees from a shareholder who sued the cooperative after the board ordered the removal of dog he'd kept in violation of a no-pet policy — and despite the shareholder's after-the-fact claim of disability.

Harold "Heshey" Jacob, longtime property manger of the sister co-ops Hillman Houses and East River Housing, knew in 2009 that sludgy and sooty No. 6 heating oil was on its way out. With the help of New York State Assembly Speaker Sheldon Silver, who lives in Hillman, he convinced the co-op boards of the 2,500 -unit, seven-building complex to switch to dual-fuel systems using cleaner No. 2 oil and, mainly, natural gas. It was a big, big switch. How did he manage to convince not one but three boards to go that route?