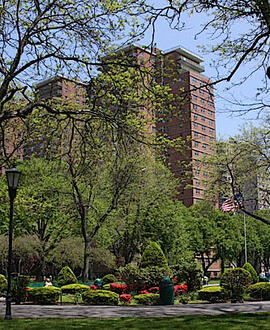 When you're one of the earliest residential cooperatives in New York City and you've managed to reach your golden anniversary while remaining a bastion of affordable housing, you've got reason to celebrate. Coney Island's historic Amalgamated Warbasse Houses did just that this month with a blowout for its roughly 8,000 people in 2,584 apartments across five buildings. And as the Brooklyn Daily reports, citing co-op board president Michael Silverman, it didn't cost the shareholders a single cent.

Recent news affecting co-op / condo buyers, sellers, boards and residents. This week, The Plaza puts the pedal to the mettle, as the storied hotel-condominium sues to get rid of a CitiBike rack. Also suing: Corporations fighting Joan Rivers' condo nemesis Elizabeth Hazan (see last week's News Roundup), and Yoko Ono, who says her West Village co-op board is walking on thin ice. We've renovation plans a board won't like, the latest on mortgage rate-locks, and superstorm Sandy woes persist in The Rockaways, Coney Island and elsewhere.

Recent news affecting co-op / condo buyers, sellers, boards and residents. This week, union workers say they're getting a Bronx cheer, Christine Quinn gets a nod in Queens, and a City Council candidate gets endorsed by a board in Brooklyn. Plus, a condominium board near the U.N. sues a law firm, and if you've ever wondered if you can legally photograph or shoot video of fellow residents breaking rules, find out now.

March 22, 2010 — A New York City sales-tax break that helped to make electricity more affordable is going away August 1. That's when customers of independent ESCOs — energy service companies — will have to pay the same 4.5 percent sales tax on the delivery side of your utility bill that Con Ed customers already pay. That's on top of the 4.5 percent city we currently pay on the supply side of both ESCO and Con Ed bills.

How much will it cost co-ops and condos? For one large co-op — Amalgamated Warbasse Houses in Brooklyn, a five-building, 2,585-unit co-op that went with an ESCO in 2007 — the additional taxes total an estimated $320,000 a year. If you want to do the math for your own building, that's an average of an additional $124 an apartment.

Recent news affecting co-op / condo buyers, sellers, boards and residents. This week, we pick up the pieces from Hurricane Sandy, with timely advice from insurers, property mangers and others, along with a sneak peek at an e-mail exchange among some condo owners in Lower Manhattan. Plus, a former doorman tells how incredibly cheap the billionaires are at 740 Park Avenue, and a free-speech case goes to court.