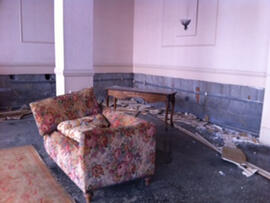 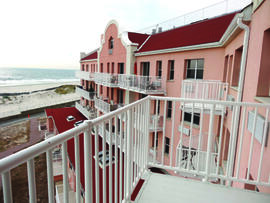 On the Money: When Lenders Run from Arrears

Loans to co-ops or condos are usually fairly easy to place — if the association's financials are in order. One of the areas that lenders examine is the state of the association's arrears. "If you have more than 10 percent arrears, and in some cases more than 5 percent, you've got a problem," says mortgage broker Pat Niland, president of First Funding of New York.

That was the case at Lido Beach Towers, a 184-unit oceanfront condominium in Lido Beach, on Long Island. This luxury property had suffered severe flood damage from superstorm Sandy, and it needed millions of dollars for repairs. It was not the first time the board had needed funds for such work, however.

Earlier this month, Tudor Oaks — which consists of five two-story garden-style apartment buildings — reverted from a co-op to a rental property after going into foreclosure. It's a very rare, and extremely sad, occurrence, but documents confirm that the 106-unit property in Middle Island, Suffolk County, was sold at auction, after it failed to reorganize under Chapter 11. Now shareholders are left with unsecured loans, rather than share loans, since the stock and leases were canceled. And it was a tense Thanksgiving for tenants who, since they aren't shareholders, are now wondering where they stand in this whole mess. CBS New York reported that Fairfield Properties, the new owner, told 1010 Wins' Mona Rivera it has no plans to evict anyone. Fairfield Properties added that it "has invited every occupant to apply to become a tenant with Fairfield, and many occupants have already accepted that invitation." But the situation for renters is a little more complicated. According to Rivera's report, Vanessa Baird-Streeter, a spokesperson for Suffolk County Executive Steve Bellone, stated that tenants received letters from Fairfield letting them know that as of Nov. 17, anyone occupying a unit who is not the shareholder no longer has a right to remain in that unit. The letter to renters from Fairfield also states that it will send out a separate notice "with respect to options and payments." Now many of these renters may end up having to find a new place to live. 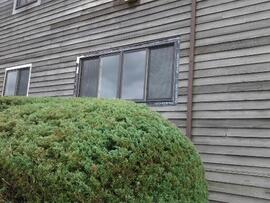 Pat Whaley has learned a few lessons in her position as board president at Villas on the Bay, a 42-unit condominium in East Moriches, N.Y.

Built in the early 1980s on Long Island’s South Shore, not far from the tony hamlet of Southampton, the four-building condo was, she says, falling apart. "We are on a beautiful piece of property overlooking a beautiful coast, and our buildings were awful. They were really in deplorable shape." Fixing the problem was the main reason she had run for the board. "We are right on the water with full front exposure, so it had been at least 30 years, and it was a continual maintenance and repair project; we needed lots and lots of work." 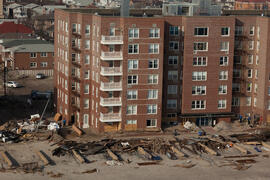 The Federal Emergency Management Agency (FEMA) has announced a further six-month extension for superstorm Sandy victims who carry the federal government's Standard Flood Insurance Policy. The deadline for filing an updated "proof of loss" form — a statement on the amount a co-op or condo apartment owner is claiming under his or her flood-insurance policy — was already extended once to April 28, 2014, and has now been extended to October 29, 2014. The extension applies to losses from Sandy flood damage that occurred between October 25 and November 6, 2012.

Birchwood on the Green, Villas at Oceanside, Bell Beach

Birchwood on the Green, Villas at Oceanside, Bell Beach

Co-op and condominium managing agents throughout the region continue to cope with the aftermath of Hurricane Sandy, even as a new storm is predicted for Wednesday, November 7.

Peter Lehr, the director of management at Kaled, reported that Birchwood on the Green, a 334-unit co-op in Oakdale, Suffolk County, on Long Island, was hard hit by the storm: “The power went out and we have to deal with [the building’s] sewage treatment plant. We were scrambling around to get the power up and running, at least to the sewage treatment plant. They got power back in the complex Friday — that’s three or four days without it — and our environmental team has been monitoring the situation because you’ve got to make sure that the [sewage plant] chemicals are balanced right. [If they’re not,] Suffolk County will come in and violate you.”

Baby, it's cold outside, and your boiler and heating system are going full-blast. That's a big energy cost for your cooperative or condominium. Fortunately, you have options. With supplies of natural gas high and prices low (though higher than last year), it may make sense to switch from oil to gas — or perhaps to to a dual-fuel burner capable of operating with either. In our latest Teachable Moments column, two veteran property managers relate some real-world experiences of how they helped their co-ops and condos pull the trigger on pulling the switch. Did it work? Well, one place is saving $50,000 a year and others are saving six figures. Might be worth the energy to consider. 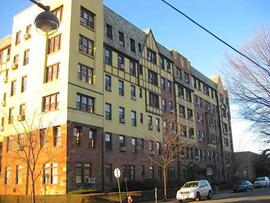 The 99-unit co-op at 4 Maple Drive in Great Neck Plaza, a village in the town of North Hempstead, N.Y., doesn't have its own parking garage. No problem! There's a municipal lot next door! And since village residents in multiple-dwelling buildings can buy a residential parking permit for just $90 a quarter, it seemed a pretty good deal — at least until, as the residents made clear at a village board of trustees meeting recently, the garage became "the scene of car thefts, teenagers smoking marijuana, having sex, taking sexually explicit photos while on a resident’s car, drinking, public urination and other obscene acts," according to The Island Now. Tires are being stolen and the super's truck was vandalized. And since the local police don't patrol there much, the residents want security cameras. But there's a problem! The village mayor says there's no money for cameras and a security company to monitor them. Sooo ... nightly party at the garage, kids! Be sure to bring your tire irons and jacks! 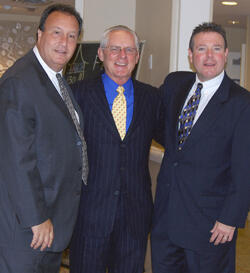 Sept. 21, 2009 — We don't usually write laundry-industry trade stories, but we're invoking the kids-with-cancer exception. That's the one that says that if a company with some connection to your usual beat does something to help kids with cancer, you write about it.

The company in this case is the Hercules Corp. of Hicksville, N.Y., a longtime laundry-room service provider for co-ops, condos and others. Founded 50 years ago this year, Hercules last week donated 12 new industrial-strength front-load washers and nine similarly commercial-grade dryers to the New York City Ronald McDonald House, a major pediatric oncology facility and a provider of low-cost accommodations to the families of gravely ill children being treated in the many nearby hospitals. 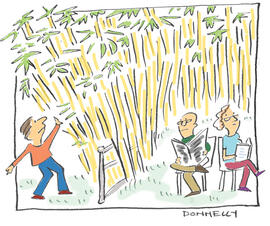 The Business Judgment Rule Won't Protect an "Unconscionable" Board

Written by Richard Siegler and Dale Degenshein on February 18, 2014

May a board impose fines and other penalties when homeowners fail to cure a violation, even though the owners claim they are being prevented from doing so by another owner?

That was the question in Tucciarone v. The Hamlet on Olde Oyster Bay Homeowners Association.