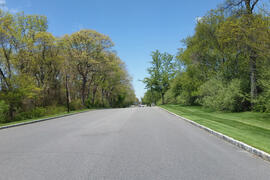 Cobblestone Curb Appeal Is a Big Gain With Little Pain

Long Island HOA spruces up its entryway without an assessment.

Earlier this month, Tudor Oaks — which consists of five two-story garden-style apartment buildings — reverted from a co-op to a rental property after going into foreclosure. It's a very rare, and extremely sad, occurrence, but documents confirm that the 106-unit property in Middle Island, Suffolk County, was sold at auction, after it failed to reorganize under Chapter 11. Now shareholders are left with unsecured loans, rather than share loans, since the stock and leases were canceled. And it was a tense Thanksgiving for tenants who, since they aren't shareholders, are now wondering where they stand in this whole mess. CBS New York reported that Fairfield Properties, the new owner, told 1010 Wins' Mona Rivera it has no plans to evict anyone. Fairfield Properties added that it "has invited every occupant to apply to become a tenant with Fairfield, and many occupants have already accepted that invitation." But the situation for renters is a little more complicated. According to Rivera's report, Vanessa Baird-Streeter, a spokesperson for Suffolk County Executive Steve Bellone, stated that tenants received letters from Fairfield letting them know that as of Nov. 17, anyone occupying a unit who is not the shareholder no longer has a right to remain in that unit. The letter to renters from Fairfield also states that it will send out a separate notice "with respect to options and payments." Now many of these renters may end up having to find a new place to live.