Frank Lovece in Board Operations on April 20, 2012

"The mood of the room was anger at a process that has not been corrected," says Bob Friedrich, co-head of the Presidents Co-op & Condo Council and board president of the 134-building Glen Oaks Village co-op complex in Queens. "Somebody brought up that a neighbor of theirs had a single family home two-and-a-half times larger than her co-op, and yet the property tax is about the same."

The turnout marked what Friedich believes is "the largest gathering of co-op and condo owners ever held in New York. I've been very involved in co-op and condo matters over the last 10 or years, and through that and [online] searches, no meeting I've ever seen or heard of has come close to this."

Finance Commissioner David M. Frankel was invited, confirms an attorney for the group, but did not attend or send a representative. A department spokesperson today did not return a request for comment.

At issue is the New York State law that requires cooperative apartment buildings and condominiums to be assessed as if they were "comparable" income-producing commercial properties — i.e., rental buildings. Because rents generally tend to go up, regardless of what the sales market does, co-op and condo buildings' assessed values for tax purposes likewise generally rise regardless of real-world value.

In addition to these apples-to-oranges comparisons, note proponents of reform, the tax playing field is not level because no other residential property, such as single-family homes and townhouses, are valued this way for taxes. Co-ops and condos are Class 2 properties, whereas virtually every other type of  home (including, inexplicably, most condominiums in buildings under three stories) are Class 1 properties — on which valuations are capped at 6 percent a year.

This means that, unlike all other New York City homes, co-ops and condos have no tax cap — and so valuations can increase by triple-digit percentages, as happened last year with some properties until a similar, smaller protest forced the DOF, which assigns valuations, to temporarily retrench: The department first announced a 50 percent cap and then, after further protests, a 10 percent cap for last year.

Across New York State, all other municipalities enjoy a 2 percent cap.

The hundreds of homeowners became "especially angry," Friedrich says, "when some of the politicians began saying, 'Oh, we only have two months left this year, we may not have a solution this year.' We've been working on this for over a year —they've had ample opportunity to get something done," Friedrich charges.

Senator Stavisky and Assemblyman Braunstein last year introduced bills aimed at taking co-ops and condos out of Class 2 and putting them into a new part of Class 1, alongside traditional single-family homes. While theirs and similar bills did not advance in Albany, Avella and Stavisky this year co-sponsored a new Senate Bill S5118, accompanied by Assemblyman Michael G. DenDekker's Assembly Bill A8118 (co-sponsored by three other Assembly members). These would create the new residential-property Class 1A to provide co-ops and condos owners the same tax-cap protection as afforded other homeowners. 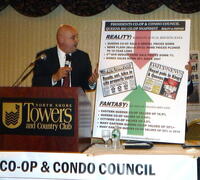 In addition, Assembly Bills A9466 ("Provides that assessed values of cooperative units and condominiums shall not increase by more than 3% in the two years following resolution of tax certiorari proceedings") and A9483 ("Relates to payment of legal fees incurred by cooperative corporations or condominiums in connection with tax certiorari proceedings") seek to cap property-valuation increases for two years after a co-op / condo successfully challenges its property valuations, and have the city pay 25 percent of the legal fees a co-op or condo is forced to incur to challenge valuations.

"The PRRC," says Friedrich (above; click to enlarge), "is putting together a meeting with the elected officials associated with the various pieces of legislation, to get them together in a room and hammer out a single bill that all should push." For co-op and condo homeowners, he says, the next step is "to write or call the mayor saying this problem needs to be fixed now. Without the support of the mayor, a lot of times changes in Albany don't happen. It's a home rule thing. Letting the mayor know we're angry about this is the number one thing to do," followed by contacting state legislators and City Council representatives.

The Presidents Co-op & Condo Council is an affiliation of more than 50 Queens co-op and condo board presidents representing over 100,000 residents.