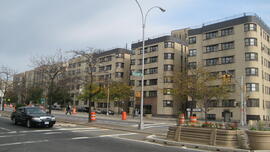 Do you remember when The Bronx was burning? The decay that became synonymous with the borough, particularly the South Bronx, began in the sixties. By the seventies it was in the grip of abject poverty, the result of total economic collapse. Property values plummeted. Slumlords abounded. Gang violence was rampant — indeed, gangs set up shop in abandoned buildings. Do you remember the arson epidemic? So many buildings burned every day throughout the seventies that the fire department couldn't keep up. Something had to give. It finally did in the late eighties, when the South Bronx finally began to experience urban renewal. The upward trend has continued: crime has dropped significantly, and property values have started to climb. You can guess what's starting to happen now. Real estate news has been abuzz with news of New York City's population soaring faster than expected. When the city is too damned crowded, its people are going to look for places to live in areas that they may not have before considered. And it looks like The Bronx is burning again, for a different reason entirely. 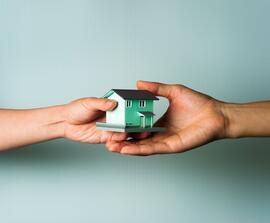 The owner of a sponsor unit in a non-eviction co-op in The Bronx wants to move in now that the original tenant, who was protected under rent-stabilization laws, has died. But there's a complication. The original tenant's son moved into the apartment about 18 months before she died, and has now claimed succession rights. Can the sponsor unit owner evict him under the owner occupancy law? That's one of the questions Ronda Kaysen fields in this week's "Ask Real Estate" column in The New York Times. "Noneviction co-ops were designed to protect rental tenants from eviction if they did not buy their apartments when the building converted to a co-op. If the son successfully claimed succession rights, he is entitled to all the rights the lease provides — including the right to not be evicted, even if the owner wants to occupy the unit," explains Kaysen. That means the original tenant's son can stay, as long as he follows the terms of the lease and rent stabilization law. But it also may come down to timing. To claim legitimate succession rights, the son would have had to have moved in two years "before the time the rent-stabilized tenant vacated the apartment." In this case, the son is a few months short, unless his mother was disabled or elderly — in which case he would only have to have lived in the apartment for one year.

It's been a couple of weeks since we told you about Marion Scott Real Estate's lawsuit against RiverBay, Co-op City's board of directors, which controls the 50,000-resident complex. The management company's lawsuit in state Supreme Court claims the corporation's move to suspend it was illegal. Furthermore, the New York State Homes and Community Renewal agency urged the board to reinstate and retain Marion Scott until it wraps up an investigation into the allegations. Which it didn't. So here we are, two weeks later. Marion Scott remains locked out, and the New York Daily News reports that a Manhattan Supreme Court judge denied Marion Scott’s request for a preliminary injunction, although "Justice Paul Wooten [did agree] that the directors acted inappropriately when they cited a host of alleged missteps and suspended the management company." The lawsuit is still pending.

Co-op City has had a rough start to 2015. The RiverBay board of directors is already in hot water with the New York State Homes and Community Renewal agency, and is being sued by ousted property manager Marion Scott Real Estate. Now what? Eight Co-op City residents have been diagnosed with Legionnaires' disease — a severe form of pneumonia. That's eight of a total of 12 reported cases in The Bronx since December. NY1 reports that tests on the tower used to cool the massive complex's heating and electrical systems came back positive for the bacteria that causes Legionnaires'. The New York City Department of Health and Mental Hygiene has "ordered Co-op City officials to decontaminate the towers and shut them down." Meanwhile the New York Daily News reported that RiverBay is "paying a chemical treatment company $200,000 to scrub down the tower." You cannot catch Legionnaires' from person-to-person contact, but rather from inhaling the bacteria. According to the Mayo Clinic, older adults, smokers and people with weakened immune systems are particularly susceptible. Symptoms include headache, muscle pain, chills and a fever of 104 degrees or higher.

Not So Fast: Co-op City Told to Reinstate Marion Scott During Investigation

It's been an especially tumultuous few months in Co-op City. In October 2014, the massive residential complex in The Bronx announced plans to replace Marion Scott Real Estate, the managing agent that oversees all operations at the Mitchell-Lama complex in Baychester.

A month later, the New York Daily News reported that during a public meeting, the RiverBay board of directors, which controls the 50,000-resident complex, had officially taken over "day-to-day operations." According to the report, the board was already considering bids from eight competing companies to replace Marion Scott. Moreover, the board reportedly made serious allegations against the management company; sent a letter to the state Division of Housing and Community Renewal, the agency in charge of affordable housing; and called for a state investigation of its charges against Marion Scott.

It was already apparent, however, that severing ties completely would be a lot more complicated than expected. Why?

Things Heat Up Between Co-op City and Management Company

Late last month, we told you about Co-op City's plans to replace Marion Scott Real Estate, the managing agent that oversees all operations at the Mitchell-Lama complex in Baychester. Now the New York Daily News has reported that during a "fiery public meeting" last week the RiverBay board of directors, which controls the 50,000-resident complex, has officially taken over "day-to-day operations." According to the report, the board expects to replace Marion Scott by early next year and is currently considering bids from eight competing companies. The board is making serious allegations against the management company and has sent a letter to the state Division of Housing and Community Renewal, the agency in charge of affordable housing. It's also calling for a state investigation of its charges against Marion Scott. But severing ties completely may be a lot more complicated than expected thanks to the terms of RiverBay's financing deal with the government and Wells Fargo Bank, the report said.

The massive Co-op City residential complex in The Bronx has sent out requests for proposals to seek new property management.

The Mitchell-Lama co-op of 15,372 residential units in 25 high-rise buildings and seven clusters of townhouses is seeking to replace Marion Scott Real Estate, which has managed the complex since 1998, reports Real Estate Weekly. Firms can bid through Nov. 19 to manage all of Co-op City or either the residential or commercial portions, the magazine said.

Co-op City marked a first at the end of October. The mammoth housing development in The Bronx inaugurated the Rivers Run Community Garden, its first riverfront green space. The Bronx Times reports that the garden's co-founder and vice president, Leslie Peterson, wanted to transform the unused space into something that would raise Co-op City's profile and benefit the community by giving people a place to plant flowers and grow vegetables and herbs. Helping in the endeavor are the Facilitators Building 13 Association; Riverbay Community Relations; and Rivers Run Community Garden's Steering Community, which in turn, includes Co-op City residents, NYC Parks' GreenThumb and the New York Botanical Garden, among other collaborative partners. You might think their timing is odd, since winter is fast approaching — but there is plenty of work to do ahead of the garden's anticipated spring 2015 completion, including landscaping, constructing walkways and laying mulch in certain spots. 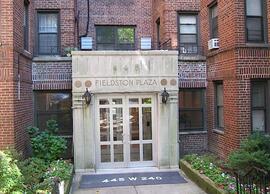 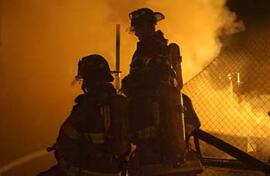 Nobody likes clogged drains. You got your hair and your soap scum and that awful, green, oozy-looking thing I told you to go see the doctor about. But now there's another good reason to keep the drains unclogged at your co-op or condo: You might get sued if you don't. Especially if a firefighter or a police officer is involved.