The super had heard rushing water in the early-morning hours, and thought it was raining heavily outside. A call from the overnight doorman alerted him that 13th Street looked like a miniature Hudson River. Bissell hurried downstairs and saw that the basement was in serious trouble. Cascading water was coming down through the ceiling and up through the drains.

The Pipe That Failed

Butterfield House and many surrounding buildings were being ravaged by an unpredictable, almost unthinkable, calamity: A 36-inch section of cast-iron water pipe, laid underground at Fifth Avenue and 13th Street in 1877, had failed. That failure sent water and silt pouring into the Butterfield House's basement and underground garage, where all of the 56 parked cars and three motorcycles became a total loss. The water also ruined Bissell's office and workshop, the gym, children's playroom, storage lockers, and laundry room. The building lost running water, heat and elevator and Verizon service. The electricity, miraculously, was unaffected.

Bissell, a native of Queens, has been the live-in super at Butterfield House since 1992. He heads a staff of 12, knows the building's systems intimately and had weathered disasters before — flooding and blackouts, among others. He knew he was facing a triage situation. He also understood the need for grace under pressure. "You've got to try to deal with it with a clear head," he says.

Step One: Elevators and Electricity 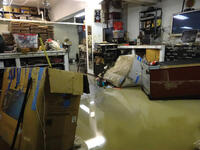 His first move was to check that the five elevators were unoccupied, then send them above the first floor and shut them down, safe from the flood. After that, he turned off the two pumps in the basement that send water to the roof tank, so that the system did not become overloaded. The fuse boxes were wet but functioning — because the water was fresh, not saline — and the fire department advised him it was not necessary to shut down electrical power.

Now Bissell summoned his 12 staffers and called Brenda Ballison of Douglas Elliman Property Management, who has managed Butterfield House since 2008. Ballison called the building's insurance carrier, who promised to have a remedial crew on-site by first light.

As pumps began to deal with the eight feet of water, as well as the silt and sewage that had inundated the basement, Bissell and his staff set up a command headquarters in the lobby. They and the managing agent began dealing with repair crews and city agencies, and orchestrating the planned departure of many of the shareholders. The board alerted residents of the situation via the computerized Building Link communication system. Shareholders who didn't own computers got a knock on the door.

"First and foremost is the safety of the residents," says Bernstein, who, as principal with Lawrence Properties and president of Bernstein Real Estate, had dealt with flood situations during superstorm Sandy. "At first, people don't grasp the gravity of the situation." At the Butterfield House, for example, some residents wanted to know if they could go downstairs and do their laundry.

He urged shareholders to leave the building, and about three-quarters of them heeded that advice. Then he checked himself into a nearby hotel.

By the evening of the second day, enough water had been pumped out of the basement for Bissell and his staff to go downstairs and begin assessing the damage. The staffers stayed on duty around the clock for the first three days of the crisis, carrying five-gallon water pails upstairs so that the residents who remained in the 13-story building could flush toilets. They also ferried drinking water, food, and packages.

All Hands on Deck

"The staff is the key to everything," Bissell says. "You need manpower, and if you've got it, it makes an emergency that much easier to handle."

Building systems returned to service piecemeal, and the staff went door to door making sure the running water was clear and lighting fixtures in vacated apartments had not been left on. Shareholders began trickling back into the co-op within five days, and by the end of January, most had returned to their apartments.

The building employees, Bernstein says, "were dedicated in a way that's hard to explain. Without our staff, this building never would have gotten back on line as fast as it did."