> BOARD OPERATIONS > A CO-OP'S EXPERIENCE WITH LANDMARKS PRESERVATION COMMISSION, PART 2

Architect Michael Notaro, a principal with Zaskorski & Notaro: "I know the building feels it was forced to spend extra money to do this. All in all, I think it added value to the building. I would look forward to working in the same manner with the landmarks commission because I feel it went very well."

Sosnick: "[Potential buyers] do not give a hoot about [buildings being] landmarks and changing the [window] profile four inches [to meet Landmarks Preservation Commission requirements] Our board and our building are fully supportive of [LPC's] mission to preserve and protect the architecture in our neighborhood, which we value. [But] we could have kept the profile exactly as it was and no one would have said it's inauthentic or not historically accurate." 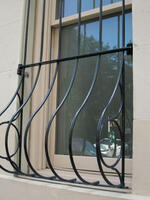 Notaro: "I think that it makes a difference. The shadow line and the relationship of the plane of the glass to the exterior of the wall — it can look odd and contrary to the historic configuration if it's pushed too far in or too far out. Getting it just right was important to the landmarks commission because their mission is to restore historic character and for new work to be appropriate."

Sosnick: "It would be much more equitable if there were a mediation process that could issue rulings that were both timely and inexpensive. In that way, the problem faced by my building and undoubtedly others could be adjudicated in a way that would, at the very least, give applicants the perception that there exists a system of checks and balances, which is sorely missing in the current process."

LPC spokesperson Elisabeth De Bourbon: "The commission's staff is always open to helping applicants address cost concerns and would have been happy to work to find a less costly solution in this situation had it been brought to our attention. … Nobody came to us and said [this cost] is going to wreck the project. That never came up."

Sosnick, responding to "That never came up": "Our executed agreement with Michael Notaro references that during the regulatory phase and the documentation phase, he was our designated representative to LPC. I know that Michael was as concerned as we were regarding the impact of LPC's decision on our budgetary limitations, and I'm certain that he communicated these concerns directly to LPC. I admit to being perplexed that LPC would respond in this way."

A Co-op's Experience with

Notaro: "I believe that LPC helped [the building] to the extent they could without triggering a public hearing … They did work with us. They did come to the site. We avoided a very expensive and time-consuming full-commission hearing. We couldn't have asked for more."

De Bourbon says the meetings referenced by Notaro were to deal with a specific issue concerning the window placement — not to discuss the bigger issue of "blowing a hole" in the budget: "There was no overall complaint that this was going to sink the finances of the building."

Steven Wagner, a partner at Porzio, Bromberg & Newman, unaffiliated with this building: "[The LPC] often will work with buildings. They understand that cost is a consideration. They will work with them on materials, they'll work with them if something is not absolutely identical but is similar and gives a similar appearance."

Wagner gives an example: a landmarked white-brick building he represented before the commission needed to replace its façade. Because the type of construction used in most 1950s white-brick buildings is problematic -- the porous brick allows water to get trapped in wall cavities, spurring deterioration -- the building and the commission found a way to preserve the appearance while using more advanced materials and construction methods.

Wagner, on what should boards tell residents when faced with a landmarks-mandated expense: "First of all, [say,] 'We don't have a choice.' And second, they have to realize they are custodians of the building and part of the history of New York City and it should not be for them, in the interest of saving a few dollars, to destroy it." [The town's landmarks] are part of what makes New York New York."