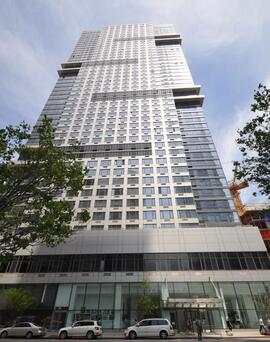 There's ice, ice, baby, at Atelier, the 46-story luxury condo at 635 West 42nd Street in Manhattan, which plans to become the first known building in New York City with a rooftop ice-skating rink.

Condo board president Dan Neiditch told the Daily News, “The outside space has always been wasted during the winter. Now, you’ll be able to skate around while overlooking the city.” The building, which has been home to the likes of Lindsay Lohan, Ricky Martin and Brendan Fraser, plans to debut the 3,000-square-foot rink on Nov. 15 and operate it through March each year. Nice, nice, baby.

Score One for Freedom of the (Real Estate) Press

The New York Observer is celebrating: A judge has dismissed a lawsuit against that newspaper and the website TheRealDeal.com, filed against them by Robert Gans, CEO of Scores Holding Co, Inc. Both publications picked up a story from the New York Post in December 2012 about Gans being sued by the board of the Atelier condominium at 635 W. 42nd Street for allegedly allowing an escort service to be run by one of his employees out of an apartment there. Gans sued the publications over a technicality in their language when describing the suit, but according to the Observer, the judge "basically said that even if all of the plaintiff’s claims were true, they didn’t amount to ‘any cognizable legal theory.’”

Recent news affecting co-op / condo buyers, sellers, boards and residents. This week, Attorney General  Eric Schneiderman sues developer Yitzchok Schwart over alleged shoddy construction of Brooklyn's Maspeth Plaza condo, co-op boards and others want firings at the Department of Finance for its property-tax debacle and an East Village woman is fighting her co-op board over a service animal. Plus, people-friendly co-ops and very rich people-friendly co-ops. And for co-op / condo boards, the struggle over real estate brokers as board members.

Recent news affecting co-op / condo buyers, sellers, boards and residents. New York City Controller John Liu wants to hear from co-ops, condos and others who suspect the Department of Finance overvalued your building for tax purposes. Plus, a Queens co-op is putting up signs to try to prevent people parking legally on a public street, the Attorney General gives developers an extra six months to digitize their offering plans, and a co-op board goes after a widow and widower. And speaking of boards, a lawyer tells how to collect arrears by cutting off amenities.