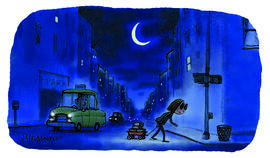 Nocturnal cobblestone harvesting pays off for this co-op shareholder. 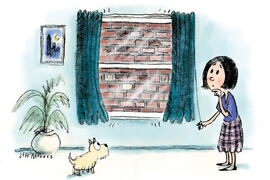 This Is New York, Where Views Are Subject to Change

A co-op resident learns that a room with a river view isn’t everything. 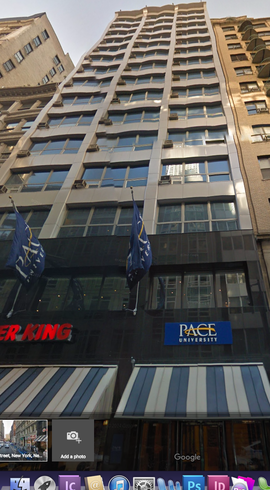 Pace University has put its 15-story dormitory at 106-108 Fulton Street in downtown Manhattan up for sale, and the building’s 75,000 square feet above the retail ground floor are being marketed with an eye toward “mid-market luxury housing” – probably condos, the New York Post reports.

The property could fetch about $60 million for Pace, which plans to vacate the building in June. Though modest in size compared to the gaggle of new projects on the once-grimy, newly resurgent stretch linking the East River and One World Trade Center, the dormitory “is ready to go right now,” says Kenneth Zakin, head of the sales team at Newmark Grubb Knight Frank.

Originally built in 1900, the structure was an office building and a hotel before Pace converted it to a dormitory in 1999.

No word yet on whether the Burger King on the ground floor will stay or go after the building is sold. 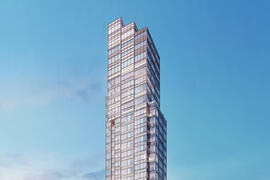 'Ground Zero Mosque' Will Be Ultra Luxury Condos Instead

It was a proposed project that sparked political controversy and international debate. Manhattan developer Sharif El-Gamal wanted to build a 15-story Islamic cultural center and mosque at 45 Park Place, just two blocks north of where the World Trade Center towers once stood. Because of the heated reaction, El-Gamal opted to scrap those plans four years ago. Now the developer is back with a project that caters more to the city's vibe: a 70-story condo, complete with amenities that rival those offered by a five-star hotel. According to Bloomberg Business, "El-Gamal's Soho Properties has proposed a 667-foot (203-meter) condominium tower at lower Manhattan's 45 Park Place. The glass skyscraper, which has yet to break ground, will include at least 15 full-floor units of 3,200 to 3,700 square feet (297 to 344 square meters), and average prices higher than $3,000 a square foot." More good news for those multimillionaire buyers who make up the ultra luxury market. 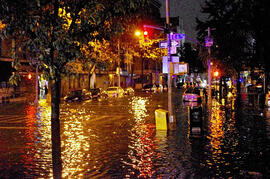 They say a hard rain's gonna come. And so when the next Irene or Sandy inevitably storms into New York, downtown Manhattan buildings want to be prepared, reports DNAInfo.com. This can involve a lot of things, from surveying residents, so that you know who might need special assistance to evacuate, to installing an emergency generator. And some are actively looking at deployable flood barriers. As Habitat has previously written, flood barriers aren't cheap — Liberty Terrace in Battery Park City is thinking about one that could cost $80,000, DNAInfo says. But when the alternative is displaced residents, no light or electricity, expensive restoration of ruined ground-floor and basement levels and dealing with the paperwork of insurance reimbursement and the like, it well might be worth it. 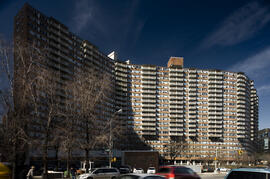 Near Chinatown, a Co-op Rises to the Challenge

When Chatham Green was built in 1961, it was a striking departure. “The most aesthetically ambitious unified assemblage of high-modern buildings in the city,” wrote the architecture critic Francis Morrone some years later. The complex, built in 1961, now seems to have as many admirers as detractors of its design.

“I really like the shape of this building, and I've always wondered what it's like to live there,” writes one observer on the website Wired New York. “It looks very high-density.” But another blogger counters: “Reminds me of a[n Anthony] Burgess-inspired dystopian future vision, circa 1960. Horror show.”