Granted, if you're desperate, co-op and condominium offering plans — which contain proprietary leases and other governing documents — are on file with the New York State Attorney General's Office. But to get copies, you need to file a Freedom of Information Act request and pay for each of generally 200 to 300 photocopied pages. 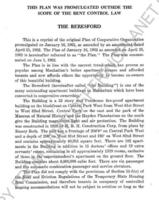 Unless, that is, you live at one of the nearly 600 co-op and condo buildings / complexes listed so far at OfferingPlanet.com, the cleverly named brainchild of a Brooklyn attorney who has had these public documents scanned and digitized for a free online database. [Click on sample page image at left to enlarge]

"A lot of my practice involves co-op and condo transactions," says Phil Lavender of Marcus Attorneys. "With the advent of the digital age, increasingly I'm getting PDF versions of offering plans. The thought occurred to me of a online repository."

The normal advantages of such databases apply: Time-savings, convenience and environmental conservation. "I have multiple deals sometimes in the same building and each broker sends me a copy [of the offering plan] even when I tell them not to. I have three or four copies of the same plan and amendments, huge thick books," Lavender says. "What a waste of paper."

And apartment closings, he notes, aren't the only thing that can waste paper. "Let's say you need to see the original engineer's report, or the power of attorney [document]. You call up the managing agent and they're not going to break out just that portion," he maintains. "You may pay $200 to $300 because they're going to copy the whole plan even if you only need, say, a quarter of it."

The site, which is free but requires registration, is "a real labor of love with me," Lavender says. "Anybody who wants to access it. Managing agents and others may very well have online versions of offering plans, but they charge a couple hundred dollars [per plan]. The cheapest I saw recently was $25 for [one for] a co-op in The Bronx."

He's acquired plans by getting the word out to brokers, managing agents and others. "Anybody who has an offering plan, digital or otherwise, I'll scan it, I'll make it available. When brokers give me an offering plan, I have someone take apart the book and scan it." In more and more cases,  he says, "Brokers will call and ask me to post their offering plan on the site," saving the broker time, paper and postage costs and saving prospective buyers time and storage space since they can simply download the PDF and not print it out.

A self-professed New York real-estate buff, Lavender points with pride to "some very old offering plans from the 1920s and 1930s. The Chateau, in Jackson Heights, built in 1923, [is this complex of] 10 buildings surrounding this huge garden," he says of one landmark, whose residents have included the late actor Montgomery Clift. "The architecture is amazing there, and [through its documents] you get to see the history and what they had in mind." Offering plans per se started to be required in the 1970s, and prospectuses earlier than that.

Other history abounds. The 1969 prospectus for 285 Riverside Drive tells of a nearby kindergarten and elementary school at 101st Street and Amsterdam Avenue, P.S. 179, that is no longer there. In 1982, the super at 3 Sheridan Square made $373.66 a week, and the doormen $298.73 each. Twenty years before that, a 13-room, six-bath penthouse at the Central Park West landmark The Beresford cost $62,500.

The site has some navigational shortcomings — "New York" in the pulldown menu is really just Manhattan, and "Queens" is currently empty, though there are listings under the Queens neighborhood "Jackson Heights," for example — but there remarkably few glitches for such an extensive, handmade compilation. Page 147 of the 216-page PDF for The Beresford, for example, is skewed and partially off-screen, and you might run across a missing or misdirected link on rare occasions. But aside from such minor and easily corrected shakedown issues, the enterprise overall is a remarkable — and remarkably welcome — undertaking.

Indeed, says Lavender, "It's a struggle to convince people it's free and that I'm not making money from it. I'll be candid — it's good public relations for me as an attorney, and eventually I'd like to sell advertising on the site, but right now," he adds good-naturedly, "it's costing me money!"