The only plastics that should be

recycled are bottles and jugs.

After the seminar, Miller's co-op installed signs provided by the DSNY that said "trash only" over trash bins and signs for recycling over special green recycling bins. So how did it feel when he walked into that laundry room and saw a recycling bin brimming with plastic bottles and jugs? "It was so awesome," says Miller. "When you have a big building like this one, you make one tiny little tweak and then you multiply that by thousands of people, it's tremendous. … And it was so easy."

Green in the Bank

Improved recycling also saves money, and not just from fewer fines for improper recycling, says Eve Martinez, program manager for the initiative. "A lot of times, people in the building are recycling, but they're putting the wrong things in there, so the super or the staff has to spend a lot of time slogging through it and pulling out all the contaminants so they can put it out at the curb and not get a ticket," says Martinez. "That's money [because] it's an efficiency thing."

Board treasurer Enid Israelson said volunteers from her Brooklyn co-op, Terrace Gardens, attended a recent seminar and brought back helpful information. "Recycling affects us because it's an extra burden for our porters when it's not done correctly," she says. "It's a financial burden when the city fines us, and it's a vermin problem when people leave food garbage on recycling."

At the seminar, attendees learn what is supposed to be recycled and — almost as important — what is not. "People often over-recycle plastics," says Martinez. "The only plastics that should be recycled are bottles and jugs." That means no yogurt containers, plastic bags, or clamshell-type packages.

That surprised Karin Haerter, who manages a 44-unit Brooklyn co-op and attended a seminar about a year-and-a-half ago. "I've been involved with real estate and property management a long time," she says. "I thought I already knew what I needed to know." But she found that the ubiquitous little triangular-arrow recycling symbol doesn't necessarily mean the item can be recycled in New York City. "I always thought that if it had the little triangle it should be able to go into recycling, and it's totally not the case," she says.

The seminar also teaches how to create a well-functioning recycling room, making sure that everything is well-labeled and easy to understand. "If you set up a good recycling center, a lot of people will cooperate more," Martinez says. "They want something that makes sense and is easy to see and do." Another important lesson is on how to communicate with residents, especially those who don't recycle. "We spend a lot of time helping [board members] learn how to motivate those who are not cooperating," she says. 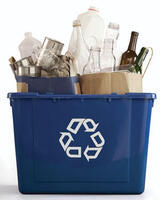 As part of the program, Martinez or other DSNY staff members also visit a participating building to see the condo or co-op's recycling in action. There they can often make specific suggestions on how to make it work better. "You often see something that the person who has lived there for two years doesn't see," she says.

It was a very small change in the recycling room that led to an improvement at Terrace Gardens. The 375-unit building had recycling bins with stickers indicating what type of recycling went into each container, but after the seminar, Murray Lantner realized there were stickers only on one side. If the bin was put away with the sticker facing in, residents got confused about what went where.

Another small but important change was to put DSNY-supplied labels on trash chutes that said, "trash only." Lantner says he also learned to put paper recycling containers near the mail area to streamline junk mail recycling.

Miller, the volunteer from Seward Park, is working toward a master's degree in sustainability management at Columbia University. Still, he says, others who want to attend the seminars don't need any green training. "The good thing is that you don't have to have any special knowledge," he says. "It's inviting to everybody."

Adapted from Habitat April 2012. For the complete article and more, join our Archive >>