The five-building, 1,147-apartment Dayton Beach Park, a middle-income, Mitchell-Lama cooperative in Rockaway Beach, Queens, suffered tens of millions of dollars in damages, says co-op board attorney Michael T. Reilly of Norris McLaughlin & Marcus. Tens of millions? Really? "The boardwalk in many parts was lifted off from the support columns and was moved by the surging storm waters and deposited onto Dayton's property," Reilly told Department of Parks & Recreation Commissioner Veronica M. White in a May 9 letter. Co-op board president Jennifer Grady, however, told the New York Daily News the complex had spent about $175,000 for landscaping, an irrigation system and soil restoration.

Regardless, Dayton Beach, shortly after being struck by superstorm Sandy, did undergo an extensive restoration project. Then over the past few weeks, Reilly says, contractors hired by the City came into the neighborhood to repair and restore the beach and boardwalk. The co-op's residents, he wrote, "have been subject to relentless pile driving and construction into the night." As well, he said, "It is highly likely that the extent of the physical damage caused by the vibrations to the buildings will surface during the next Local Law 11 analysis. at which time Dayton will be forced to fix millions of dollars in façade and brickwork."

The final straw appeared to come on May 10, a day after Reilly sent the letter: A flyer was distributed by the New York City Department of Design and Construction (DDC) warning that, "Starting next week, new, factory-built comfort and lifeguard stations will be delivered to beach locations during the overnight hours — the only time we can move these large and heavy structures through the streets." The flyer reiterated the City's commitment "to reopening beaches in the Rockaways by Memorial Day." 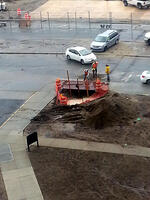 "The notice provided by the city related to street closures, not to requests for access to enter onto the corporation's property," Reilly told Habitat, adding that, "The city's contractors tore the hell out of the property. Are we blowing it out of proportion? I don't know," he continues forthrightly. "Either way, the corporation has spent considerable resources replacing the sprinklers and fixing the land. [The contractors'] trespassing damaged recently graded grounds and damaged sprinkler lines and possibly sewer lines."

A DDC spokesperson responded in a statement to Habitat, "This work took place on City property. The excavation was done to connect the newly constructed replacement lifeguard stations at Beach 86th Street to local water mains. As with any project, we will quickly fill, grade, seed and restore the area as soon as the Department of Environmental Protection completes [its] required inspection — which will be done this week. We ask for the community's patience as we complete this vital work to restore our City's beaches following the devastation caused by [superstorm] Sandy."

Photos supplied by Reilly, however, appear to corroborate his stance that contractors were working within Dayton Beach Park property. (Click on images to enlarge.) The DDC spokesperson did not respond after being e-mailed copies of the photos, though Reilly believes the discrepancy was inadvertent. "It's probably people sitting in an office who don't know what's going on" at the actual site.

The story may have a happy ending, however. Despite Reilly's frustration, the City responded less than a week after he sent his May 9 letter. After initial contact by Ido Shargal, Queens Borough Director of the mayoral Community Affairs Unit, Reilly on Wednesday, May 15, "spoke at length with senior counsel from the law department of The City of New York," he says, "and we are working on a way to address the physical damage." What would Reilly like to see? "Compensation for damages. The cooperative spent money dealing with [the Sandy damage] and they want the property restored."

If there's any lesson to be drawn, it's that when you have issues with a City action, have the co-op board's attorney contact the appropriate official and make sure the attorney follows up. It's not always a matter of fighting City Hall — sometimes it's just a matter of letting City Hall know and then saying, "So, City Hall. Had a chance to look at that yet? What do you think?"

This article was updated to include comments by Jennifer Grady.