Frank Lovece in Board Operations on March 23, 2012

"I think that we were able to resolve the issue to everyone's satisfaction," Wagner told Habitat. "Whether they begrudgingly signed or signed because it was something they feel was to their advantage, at the end of day, everybody gets something out of it." 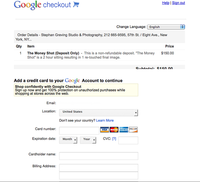 Greving did not respond today to voicemails left at his studio's phone number nor at a cell-phone number attributed to him. His attorney, Anthony Balsamo, in private practice in the Wall Street area, came to the phone, and upon hearing that the magazine is aimed at co-op and condo boards, responded abruptly, "Not interested, thank you," and hung up.

The case began when the plaintiff The Board of Managers of 322 West 57th Street Condominium filed a lawsuit in New York Supreme Court on March 1 against attorney Bruno Cova and his wife Bettina Beck of Torino, Italy, owners of apartment 33B; and fellow co-defendants Greving and David Klopp. The two had rented the unit on April 27, 2011, for $3,150 a month, starting with a May 15, 2011, occupation of the premises. Cova and his wife had bought the apartment for over $1.3 million in October 2008.

A source at The Sheffield said lease co-signer Klopp, whose identity could not be independently confirmed, was a client of Greving's.

a case study of how

to handle such circumstances.

In July, the building's managing agent, Edward Johnson of Rose Associates, received an anonymous complaint that Greving was engaged in prostitution and, per court documents,  "advertises illicit services on the website rentboy.com using the pseudonym 'Dave Bruno.'" In response to board complaints, the New York City Police Department conducted a sting operation on Oct. 27. An undercover police officer posed as a prospective client and met Greving at the apartment. There, police said, Greving agreed to perform a sex act in exchange for $325, and was arrested on a misdemeanor count of loitering in view of prostitution.

He was released on his own recognizance, yet on Dec. 13, the NYPD received a complaint that "Dave Bruno" was back in business. "Indeed," reads one court document, "Mr. Greving's profile includes a map disclosing the location of the condominium" at W 57th Street and Eighth Avenue.  Though unit-owners Cova and Beck "have notified about the illegal activity," which the condominium's governing documents prohibit, they "have taken absolutely no action to remove him from the premises," leading to the board's lawsuit.

Condo Board Sues: Your

Prostitution — Why No Eviction?

Ironically, Cova is an attorney himself — a partner in the corporate department at the Milan office of the international law firm Paul Hastings LLP, and has been involved in some of Italy's largest mergers and acquisitions, including international transactions. He did not respond to Habitat e-mails requesting comment. His and his wife's attorney, David Tendler, of Cornicello & Tendler, did not respond to a voicemail message.

Despite the salacious aspects of the issue, the board's efforts provide a case study of how to listen to resident complaints and handle such circumstances efficiently and forthrightly.