Frank Lovece in Legal/Financial on November 28, 2014

On Nov. 14, private-practice attorney Kent L. Gubrud filed a motion in New York County Supreme Court to dismiss a lawsuit against the owners of City Oases, which rented apartments short-term to tourists. The City already had prosecuted the buildings' owners, Rahman NY Inc. / Wilshire Ltd., fining them $36,700, and is now suing both City Oases and the owners for what Gubrud calls "millions of dollars."

"What the city is doing is absolutely horrific for a lot of people," says Gubrud, an attorney for 27 years who won a Housing Court case in June involving a tenant who rented out her apartment via Airbnb.

Mina Guirguis and his wife, Szilvia Patkos, leased and lived in two floors of 5 West 31st Street, and as City Oases rented space to what they considered to be legal boarders. After subletting to permanent occupants there, they moved to 59 Fifth Avenue and continued the business. In December 2011, the City made the first of several raids between then and August 2014. Mayor Bill de Blasio himself announced in October 2014 that his Office of Special Enforcement had filed a motion in State Supreme Court enjoining the buildings' owners from continuing to allow long-term residential units to be used as short-term rentals. New York law forbids apartment rentals for fewer than 30 days, in buildings with three or more units.

Gubrud's motion to dismiss the civil suit against Guirguis, Patkos and their now-defunct company alleges what he calls "Gestapo tactics" by the City. "[O]n December 12, 2011, the [Mayor's Task Force, with police] broke into Defendants' building at 59 Fifth Avenue, without first securing a warrant and without having probable cause," he writes. "They aggressively demanded entrance to the building and pushed aside the housekeeper when she responded to their banging on the door. In August of 2012, they returned and again gained entrance without a warrant or consent and engaged in shouting of demands and threats of arrest if Mr. Guirguis did not submit to their demands. When he failed to submit adequately in the eyes of the police, one of the officers grabbed him by the neck, choking him and directing him in the path desired by the officer." (See video below)

Even were enforcement less volatile, Gubrud argues, the City's "illegal hotel" theory itself is flawed. Quoting City attorney Martin Nagle saying the phrase is used only "colloquially and for convenience," Gubrud points to the City's stance that short-term rentals cause an entire apartment building — categorized as Class A under City code — to automatically convert to a hotel, categorized as Class B and having numerous requirements that apartment buildings do not.

An additional flaw, he says, is that the City also ignores the definition of "hotel" in the Multiple Dwelling Law Section 4, which defines it as "an inn having thirty or more sleeping rooms." (With fewer than 30, incidentally, you're officially a "rooming house.") Gubrud's filing also notes that nothing in the definition "depends or varies upon how short or long the duration of its accommodations are."

Here it gets even more interesting: Section 4(5) defines "a 'boarder,' 'roomer' or 'lodger' residing with a family" as someone "who pays a consideration for such residence." And Section 4(8) says it's legal to have boarders, roomers or lodgers "for fewer than thirty consecutive days."

This seems to suggest that as long as you’re living in an apartment, you legally can rent it to a boarder. What gets tricky is that same sentence goes on to say that "incidental and occasional occupancy ... for fewer than thirty consecutive days" when you're "temporarily absent for personal reasons such as vacation or medical treatment" is allowed only when "there is no monetary compensation paid." But while it's part of the same sentence, the first part is labeled (A) and the second part is labeled (B), so does the "no monetary compensation" part apply to the whole sentence or just to (B)?

"The lawful-boarders exception expressly permits 'consideration' — payment of money," Gubrud replies, noting that even the administrative body prosecuting such cases, the City's Environmental Control Board, agreed in its own appeals decision of New York City v. Abe Carrey that the law "expressly allows a paying, lawful boarder, roomer or lodger. "It's also clear that these are two completely distinct clauses because of the 'or' separating them as well as the different ... letters (A) and (B)." He calls the two sections different paragraphs, though technically both sections are in one sentence.

Yet Gubrud's most sweeping allegation may be that the ECB ignores Constitutional requirements regarding search warrants and coerces unwilling permission to enter. The police who accompany mayoral task-force agents, he says, "stick their foot in the door when the door opens and tell people, 'You say you're refusing to let in the police and the Fire Department?'"

The City has until Dec. 5 to file its response.

Should Gubrud prevail, the case likely would not impact co-ops or condos where the apartment-owner has permanently moved out and is renting for less than 30 days at a time, since the attorney’s argument involves only rent-paying boarders with the owner still living in the apartment. Gubrud, however, thinks otherwise. "This challenge affects everyone being prosecuted by the City," he believes, "not just those renting to lawful boarders, because there is no legal basis for City's 'illegal hotel' argument."

VIDEO: Neck-Grab During Issuing of a Civil Violation 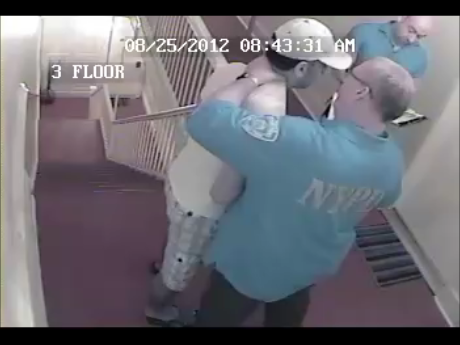