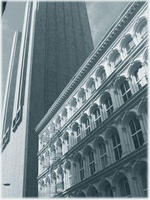 I had misgivings about throwing Luis a party this year.

As organizer of my Tribeca co-op's annual breakfast gathering for our long-time superintendent, I was concerned less with low turnout at 7:30 a.m. than about the potential for a verbal melee in the mailroom. With threats of lawsuits being flung among shareholders, the tradition of singing "Happy Birthday" to Luis and sharing squares of Entenmann's Coffee Cake could get a lot messier than the usual white powdered-sugar crumbs scattered over our dark tile floor ever did.

Until a few years ago, ours had been that rare cooperative where residents lived cooperatively. Neighbors generally could be counted on to work out the kinks of side-by-side existence in a reasonable manner. Like my downstairs neighbor who stoically weathered my children's early attempts at violin, piano, judo and gymnastics and still managed to comment – after a spirited tap-dance practice – that my daughter was "really coming along with her time step." Or my upstairs neighbors, one of whom tracked her radiator leak into my apartment even before I knew the floor was wet, while the other, then a boy, used to lull my then-young children to sleep with the muffled rhythm of his bouncing basketball.

But now on those days when I am fortunate to find myself in the mailroom with a fellow shareholder who is not complaining about another neighbor or demanding some repair be done faster, better or cheaper, the hushed conversation is always the same: What has happened to our building?

My money is on the new intercom.

Given that the troubles began after Tribeca went from being a sleepy outpost to one of Manhattan's toniest neighborhoods, it would be easy to blame the newcomers. With their fat wallets and toned thighs, the young and successful have funded the retirement of many an older Tribecan by purchasing for millions of dollars units originally acquired for thousands. But as a co-op, we were careful to accept only those hardy fugitives from uptown's amenities who were intrigued by our minimalist aesthetic: no doorman and no well-appointed lobby.

Still, one quirk gave potential shareholders pause: the intercom. We didn't have one — or, rather, not one that opened the building's front door. Visitors could buzz an apartment from the street and talk to you, but you couldn't simply to push a button to admit them. You would to go down to the front door to let them in. Going downstairs to admit people was our highly reliable security system. The theory was that we were safer in this comparatively deserted neighborhood if babysitters, houseguests and the occasional slothful shareholder could not simply press a button in response to a buzzer, risking that someone up to no good would enter the building.

Hugely pregnant at the time, I worried how I would simultaneously manage a sleeping newborn in the nursery and a grocery delivery at the building door.

The lobby, that unadorned hallway connecting the elevator to the front door, was our town square. Neighbors always could be found either on their way to or from it, opening the main door to admit deliveries for themselves or for a neighbor in a bind. In the evening, we knew who was getting takeout from where, who had found a new restaurant, who had been sent bad shrimp by another. During the day, stay-at-home parents and freelancers accepted deliveries for those who worked elsewhere. When someone gave a party, kids in the building stood sentry at the front door to let in guests and send them up. While social boundaries were observed and we never devolved to the anarchy of a college dorm, we were neighbors in the most small-town sense of the word.

But by 2000, Tribeca was no longer a frontier. Real estate prices and new construction were soaring. As ours became Manhattan's "it" neighborhood, attracting the rich and richer, the rational for our Luddite-like intercom was rendered obsolete. We who had done the front door trek for decades — dizzy with fever, cradling sleeping babies, holding together the ends of bathrobes — finally voted to install the real thing.

What we had not considered was that all luxuries come with a hidden price. Waterfront homes flood. Hilltop homes slide. Once you start buzzing people in, your neighbors become strangers.