> CO-OP/CONDO BUYERS > PROMISES, PROMISES — MEAN NOTHING IF THEY'RE NOT IN THE PROPRIETARY LEASE

Promises, Promises — Mean Nothing If They're Not in the Proprietary Lease

In Baker vs. 16 Sutton Place Apartment Corporation, Alixandra and Stuart Baker sued their 54-unit co-op, finished 1967 by the architectural firm Kokkins and Lyras, to keep it from constructing a garden on the building's roof, which included the roof of the Bakers' penthouse apartment. The couple claimed that construction of the roof garden would constitute a breach of the proprietary lease, which said the lessor (the co-op) "shall have the right to erect equipment on the roof, including radio and television aerials and antennas, for its use and use of the lessees in the building and shall have the right of access thereto for such installations and for the maintenance and repair thereof."

The Bakers argued that this provision specifically applied only to such equipment and implicitly prohibited other uses. The co-op said this interpretation was too narrow and did not take into consideration a house rule, which contemplated other uses for the roof, reading: "No planting beds, shrubs, trees, boxes or planting containers of any kind, or statuary, shall be permitted on roof or penthouse terraces or balconies except where such units are installed in accordance with the terms of a special written agreement with the Lessor…." The co-op argued that while the lease explicitly granted it the right to erect equipment on the roof, it was never intended to prohibit other uses.

if They're Not in the Offering Plan

An earlier, appellate case ruled that a co-op could use the roof for purposes other than installation of equipment. Based on this, the Baker court found that the lease in the present case did not waive the co-op's right to use the space as a roof garden, and that the lease provision did not preclude the co-op from building such a garden.

The Bakers claimed that if there were a garden on the roof above their apartment, there would be frequent and considerable noise and activity directly over their heads, and objects might fall from the roof onto their private, wraparound terrace. The Bakers further argued that construction of the roof garden would violate their right to use, decorate, furnish and maintain the hallway outside of their apartment, which they said they decorated at considerable expense; indeed, the co-op encouraged shareholders to do so, and contributed $1,000 to each shareholder every few years to offset their costs. The co-op also permitted each shareholder to decorate and furnish the hallway outside their apartment as they saw fit. The Bakers claimed that allowing a roof garden would turn their outside hallway into a noisy and busy thoroughfare for all other residents and their guests. The court, however, found that the Bakers cited no provision in the proprietary lease that granted them an exclusive right to the common hallway. 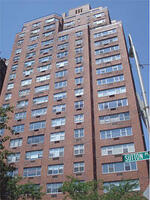 Finally, the Bakers lived in the building before buying the penthouse. Alixandra Baker claimed that when she and her husband were considering buying the apartment in 1997, she asked two board members about a dilapidated deck that had once been used as a roof garden. Baker claimed she was assured the desk wasn't usable and that the co-op wouldn't build a roof garden because the board was aware of problems the old roof garden had caused. The board member had also explained that the prior roof garden had caused leaks into the apartment now owned by the Bakers. The Bakers claimed that if there had been a roof garden in place when they purchased the apartment, they would not have bought.

Garden Party of the First Part

But the co-op submitted an affidavit from the building superintendent, who stated that while use of the old roof garden was discontinued because of leaks, it was later determined that the leaks were unrelated to the garden.

The court ultimately determined that Bakers failed to establish that a roof garden would violate any of their rights under the proprietary lease.

Comment: When you buy a co-op or a condo apartment, you give up certain rights, including the right to determine the way in which common areas of the building can be used. This is true even if use of those areas may negatively you.

Levandusky and Pullman are the seminal cases in this area. Levandusky taught us, and Pullman reaffirmed, that "the very concept of cooperative living entails a voluntary, shared control over rules, maintenance and the composition of the community." A shareholder "voluntarily agrees to submit to the authority of a cooperative board, and consequently the board may significantly restrict the bundle of rights a property owner normally enjoys."

In this case, the plaintiffs purchased at a time when no roof garden was in place. However, the board had the right to create a garden even though the Bakers might lose certain privacy rights. Had the Bakers and the co-op entered into a contract prohibiting the board from installing a roof garden above the penthouse, the parties would have been required to abide by the terms of the contract.

Richard Siegler is a partner in the New York City law firm of Stroock & Stroock & Lavan. Dale J. Degenshein is a special counsel for that firm.

Adapted from Habitat January 2009. For the complete article and more, join our Archive >>