> CO-OP/CONDO BUYERS > WHEN CARBON MONOXIDE DETECTORS SOUND: WHO TO CALL — AND NOT CALL

When Carbon Monoxide Detectors Sound: Who to Call — And Not Call

"The FDNY came in there at 8:30 at night," recalls Don Wilson, the co-op's managing agent and president of Blue Woods Management. "They didn't wait for a handyman or the super. They went to the apartment and ripped the stove away from the wall. In New York City, there are a lot of apartments which have hard-piped gas connections; they don't have a flexible hose between the stove and the gas main. In this case, the hard black iron pipe snapped."

Once the gas pipe was broken, the firefighters headed to the building's basement and, Wilson says, "Instead of waiting for someone to isolate the riser, they went to the main meter room and shut off the heat and cooking gas to 435 apartments."
For the residents and the board, the next two weeks became an ordeal. Gas valves in each apartment had to be shut off, and both Con Edison and the Department of Buildings had to see test results, including for pressure tests — which some of the gas lines did not pass.

Wholesale valve replacements followed, costing $120,000. And ironically, the detector that started the chain of events wasn't measuring a dangerous level of gas at all, and may have been malfunctioning, Wilson believes, perhaps because of a low battery. Paul Sorrentino, a spokesperson for Keyspan Energy (now National Grid), adds that weak batteries, as well as low barometric pressure, can trigger a false alarm. He advises you to call your local gas company, which will come and inspect your stove and its gas line.

Carbon in the Ov en

Carbon monoxide (CO) is produced through "incomplete combustion," which occurs when a fire doesn't have enough room to breathe. When a garage door is closed tightly and a car is left running, for example, the engine uses up the available oxygen in the air and carbon monoxide is produced. Carbon monoxide bonds with iron atoms in human hemoglobin, a complex molecule in the blood that carries oxygen throughout the body. If your hemoglobin can't capture oxygen, you suffocate. In 2003, 250 people in the United States died of carbon monoxide poisoning, most of them while sleeping.

It only takes a little CO, which is colorless and odorless, to create a toxic condition. Since 1986, New York City buildings have been required to install sensors that shut down furnaces in the event of a carbon monoxide build-up in the chimney. New York's Local Law 7 of 2004 made the installation of carbon monoxide detectors mandatory. 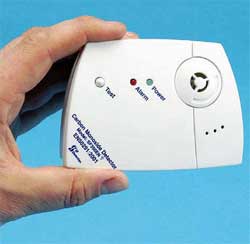 When Paula Gillen, who lives in a 120-unit, two-building Brooklyn co-op, found her carbon monoxide detector going off, she replaced the batteries and then put in a call to her managing agent. She reasoned that, because her apartment is directly over her co-op's parking garage, fumes from the cars were making their way up through the floorboards. Although she had none of the symptoms of carbon monoxide poisoning — headaches, tightness of chest, dizziness, nausea, fatigue — she naturally wants the problem fixed and is still keeping a window open.

Jerry Lemmermann, vice president of operations at the co-op's management firm, JAL Diversified Management, assigned manager John Monck to the case. He engaged an environmental firm to take readings in Gillen's home. Lemmermann says that JAL will determine if there are any openings from the garage to the apartment and also make sure the garage vents are working.

Sorrentino of Keyspan cautions that carbon monoxide is an extreme hazard when people use their ovens to heat their apartments, as well as when they are cooking for very long periods. "Don't use your gas flame to heat your apartment. And you've got to crack the window when you're cooking a turkey for six and seven hours. Keep [the apartment] well-ventilated."

What should you do to prevent mishaps like the one at the Bronx building? "For any kind of a gas emergency, including carbon monoxide," says Wilson, "the residents should call the doorman or the super — whoever is on duty — first. In most instances, it's a minor problem that can be easily fixed, and if you don't handle it that way, and there are delays, and the fire department shows up ten minutes later, it could be a much bigger problem. I've had situations where the pilot light on a gas stove is blown out, and you'd hate to have a building shut down for something like that."

If a carbon monoxide alarm sounds but no one is experiencing symptoms, Con Ed notes, "ventilate your home with fresh air, turn off all potential CO sources and leave the affected area." Once you've eliminated the possibility of a malfunctioning detector, the next step — a full inspection including environmental readings — should be up to your managing agent.

Adapted from Habitat March 2005. For the complete article and more, join our Archive >>