> BUILDING OPERATIONS > THE VALUE OF PITCHING IN, THE SIMPLEST COST-SAVING PLAN OF ALL

The Value of Pitching In, the Simplest Cost-Saving Plan of All

"Sometimes it gets pretty hectic, especially when we're doing a major capital improvement," says board president Mauricio Guerrero. "And there are always surprises. Last Saturday, I went down to the basement to check on things and noticed water dripping out of the water heater. It was a lot of work getting a plumber, finding a new water heater, removing the old one, and installing the new one. By Wednesday, we had it fixed, and people were without hot water for only about five hours. That was a bump in the road. It doesn't happen all that often. Generally, things run pretty smoothly because we don't let things slide."

And just last winter, when Arctic-grade snowstorms raked the city, board members and shareholder volunteers pitched in to shovel the sidewalks. "It became routine," Pinero says. "We just grabbed the shovels and did it, and it didn't cost anything." 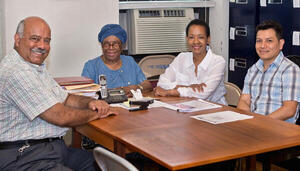