How A Brooklyn HDFC Co-op Succeeds in Keeping Apartments Affordable

The building had been ready for people to move into by 1985, after a contractor completed the finish work. Among the first to arrive was Brenda Reed, who joined the very first board of directors and still serves as secretary. She and the other members of the original board were determined to keep costs down, and they agreed that a key to success would be self-management.

"In our naïveté, we said there's nothing to managing a 16-unit building," says Reed. "With the management scandals of the '80s, we decided we didn't want to manage the manager; we thought we would be taken care of." While Reed says she doesn't regret the decision to self-manage the building, she admits that the board members learned they couldn't do everything by themselves.

This shift in philosophy became crucial about a decade ago. A roof-to-cellar survey by Rand Engineering & Architecture revealed that the building's major systems were nearing the end of their lives. The building would soon need some major capital improvements, but thanks to a history of affordable monthly maintenance charges and no assessments, there wasn't enough money on hand.

Enter Ann Henderson, associate director of co-op preservation with the Urban Homestead Assistance Board. She helped the co-op secure a $147,000 loan from HPD with a 3 percent interest rate, and she provided some much-needed guidance. 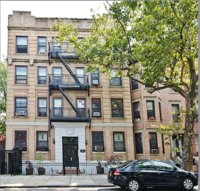 The projects got another assist:. Mauricio Guerrero, an immigrant from El Salvador, had recently moved into the building and been elected president of the board. His energy was infectious. "When I joined the board, I didn't know what I was getting myself into," he says, "but when I see a need, I jump on it."

Problems have also surfaced when apartments go up for sale at high prices in a building that is supposed to be "affordable." When one shareholder announced that he was putting his apartment up for sale, the board already had potential buyers lined up, a couple it very much wanted in the building. "But the man selling that apartment had another buyer in mind," says Guerrero. "He wouldn't let us see the buyer's application. It turned out he wanted to sell for more [than the allowable maximum]."

The board prevailed, but it wasn't the last time the members had to push back against a seller who, in an improving economy in an improving neighborhood, started having visions of large dollar signs.

Says Reed, "We tell [potential buyers that] the benefit is living here, not leaving here. For some reason, people think the rules are going to change when they want to sell."

Not likely at 572 Sterling Place. Guerrero says flatly. "We do not want to be one of those HDFCs that bend the rules so people can sell apartments for $300,000."