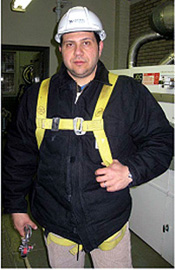 March 15, 2010 — Having exterior renovations done at your co-op or condo apartment building? Better break out the adding machine and start adding some little-known new costs to your budget — because in the wake of fatal construction-crane accidents in New York City, more stringent enforcement of building codes means you'll be paying even bigger bucks for your big jobs. How much? Enough to raise the cost of an $860,000 waterproofing to nearly $1 million.

"It's big money, it's not small change," says Gerard J. Picaso, president of the management company Gerard J. Picaso Inc. and manager of the building alluded to above. At that Upper West Side co-op, the board members got ready to tackle an $860,000 waterproofing project, only to learn that they would have to pony up an additional $100,000 to meet site-safety requirements.

What's going on? For one thing, the city's Department of Buildings (DOB) is more tightly enforcing regulations concerning supervisory personnel at exterior construction sites. Now, construction work on buildings 15 stories or taller must have a site-safety manager on the job site full-time.

These certified inspectors are required to maintain site-safety and permit logs, and perform inspections of such things as safety netting, sidewalk bridges and scaffold maintenance. Every project must also have a site-safety plan approved by the DOB before work permits will be issued. The plans usually cost from $3,000 to $5,000.

I don't think you have

up there eight hours a day

"I don't think you have to have somebody up there eight hours a day," says Picaso. "There are times when the men are just on the roof working."

Gene Ferrara, a principal at the Englewood Cliffs, N.J., engineering consulting firm JMA Consultants, agrees. "It's such overkill on these poor buildings," he says. "Two hours a day is more than sufficient. The money boards have to pay [for inspectors] is taking away from the work they should be doing on their buildings."

Part of Ferrara's job is educating managers and boards to these new realities — and to the risks they run if they choose to save money by ignoring them. "We give a seminar to managing agents," Ferrara says, "alerting them to the fact that many people don't know about these regulations. The restoration end of the business has not been required to follow these site-safety regulations until now. We tell them it's mandatory and it's being enforced. Fines used to be $250, maybe as much as $2,500. Now, they can go up to $25,000, and [DOB] can shut you down for months."

Customarily, Ferrara says, the engineer or property manager will recommend a company that can help a building comply with site-safety regulations. The board will then hire the company. Ancillary costs — permits, fees, site-safety plans and inspectors, scaffolding, sidewalk bridges — can now equal, and in some cases surpass, the cost of actual construction work. "As a result," Ferrara says, "we tell boards to do as much work at one time as possible."

Tal Eyal, president of Cooper Square Project Management, a division of Cooper Square Realty, agrees. "Inspectors are a huge percentage increase in cost for smaller jobs of $500,000 or less," he says. "The problem is that nobody enforced these requirements until a few months ago. It's a combination of politics, the crane collapses and the fact that the city needs money. Conceptually, it makes some sense. But it's expensive."

There are some people who see the tight enforcement of site-safety plans and the constant presence of on-site inspectors as the exact opposite of overkill. To these supporters, they're lifesavers.

"Fatalities in 2009 were reduced by 85 percent from 2008 [the year nine people died in the crane collapses]," notes Peter Amato, president of Site Safety, one of the largest of the dozen companies in the city that help buildings comply with safety regulations.

Actually, he's a bit off. There was an 84 percent decline in fatalities — from 19 in 2008 to just 3 in 2009, according to the DOB. It's possible to attribute the decline to a number of factors. For instance, the recession. There were 33 percent fewer construction permits issued in 2009 than in 2008.

DOB Commissioner Robert LiMandri prefers to see tightened enforcement as the cause of the lower death toll. "We have been working to change the culture of the construction industry – to put public safety ahead of profit — and our message is being heard," he said in January.

Amato agrees. "Having these new rules is correlated directly to that reduction in fatalities," he says. "It's not overkill. You could have one scaffold rig not set properly, and you could have a fatality. If you don't have these inspectors, you're going to have problems."

Adapted from Habitat March 2010. For the complete article and more,  join our Archive >>