When Linda Rosario (at left) and her 6-year-old son moved into a ground-floor apartment at 295 Stanhope Street, Brooklyn, in the mid-1980s, the four-story, tan brick building already had a Housing Preservation and Development (HPD) 7A administrator — a sure sign of a building in trouble. New York City generally appoints a 7A administrator after a building owner has failed to correct conditions dangerous to life, health or safety or in response to a petition from at least a third of the tenants.

"It was rat-infested," recalls Rosario. "There were no windows. But I took it because the administrator said, 'I'm sorry it's not in fit condition, but you can take this apartment knowing that it will change.' And within a year or two, the building did begin to change."

Similarly, in 1983, 23-year-old Manhattanite Vanda Jamison got a call from her mother, an HPD property manager. She suggested that her daughter move to 29-33 Convent Avenue (below; click to enlarge). "The one time I did what my mother told me," Jamison laughs. "It was only 60 percent occupied, there were junkies and drug dealers and there was no boiler. But she was looking to the future."

Jamison's mother thought this 44-unit building — actually two buildings with a common boiler — could be converted into a co-op and that the key was diverse tenants willing to invest in whatever it would take to make it happen. 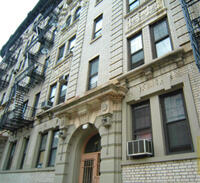 The 1970s were tough on landlords and renters alike, and while owners who torched buildings whose rent rolls stopped covering expenses got front-page coverage, others just walked away. Tenants still had a roof over their heads, but what happened when it started leaking?

The answer: Turn renters into owners. The idea looked like a win-win. Longtime New Yorkers who couldn't afford to buy through conventional routes would get to own their homes. The city would get  ground-level support in the war of attrition that was undermining low-income neighborhoods, driving hard-working taxpayers out and crime rates up.

The process for many buildings was co-op conversion through an HPD program that rehabilitated the neglected properties, drew up sustainable budgets and taught tenants the ins and outs of being property owners. First, the city stepped in and assumed ownership, then it sold apartments at rock-bottom prices to tenants who'd proved willing to stick it out in bad times. The deal came with conditions like resale price caps, flip taxes and income restrictions on new buyers, but the reward was a home that could be passed on from one generation to the next.

The then-controversial idea worked: New owners developed a proprietary relationship with their homes. And almost 40 years later, the HDFC co-op program is still going strong, administered through the Urban Homesteading Assistance Board (UHAB), created in 1973 within HPD to oversee the conversion of troubled properties. The endgame remains the same: transforming dysfunctional rentals full of demoralized tenants into communities of homeowners with a tangible stake in the future.

What can a conventional board learn from these HDFC success stories? For new board members, one lesson is clear: You had better educate yourself, because the more you know, the easier it will be to evaluate opinions from professionals, contractors and your managing agent — and better judge whether they're doing their jobs correctly.

Jamison, now board president at 29-33 Convent, quickly learned that lesson when the board began questioning its professionals more closely. The result? "We changed accountants [because] ours wasn't paying attention and the building's taxes were $100,000 in arrears," she recalls.

We were paying so much money

and we were not getting the results

we wanted. We had to change.

The board also changed attorneys because it had discovered that its lawyer was a reverse Perry Mason: He had never won a case. "Now we have a killer attorney who helps us work through things so we don't ever have to go to court," she notes. "We were paying so much money and we were not getting the results we wanted. We had to change."

Once the board is educated, it is just as important to get the residents up to speed. In Rosario's building, the board came to realize that it if it didn't educate the shareholders, the viability of the co-op itself could become questionable.

The biggest problem, recalls Rosario, currently the board president. was that rental tenants-turned-owners "didn't understand that now you didn't just pay every month and call the landlord when there's a problem — now it's your problem."

"We still have a few people who pay when they want to pay," admits Carol Robinson, a board member at the 45-unit 1815 Prospect Avenue in The Bronx, which converted in 2008. "But now if we see someone falling, we pay attention. We have two apartments with very large arrears, and we're trying to help them work on it."