The first time a balcony pane breaks and falls, it's an unfortunate accident. The second time, it's a recurring problem. The third time? It's a potential catastrophe, requiring a co-op or condo board to act fast, make repairs and take responsibility — which includes restitution and resolution. Often that involves a lawsuit. But not always.

Built in 2006 between 32nd and 33rd Streets near the Empire State Building, it's 42 stories of elegant-looking steel and glass. With black-granite floors and a waterfall in the lobby, and such amenities as a private screening room, a gym, a playroom and a fireplace lounge, the luxury condominium has apartments selling for as much as $3.9 million.

And then glass panels started falling from balconies.

The first time was on July 17, 2007. "Somebody threw a ball from one of the units and it hit a glass panel," remembers board vice president King Moy, a professional engineer. That initial pane caused a cascading effect as it hit other panels on the way down, showering glass in back of the building. The architect, the Stephen B. Jacobs Group, determined "that the shattered panel was a man-made, singular event," says a spokeswoman for the building's management company, Cooper Square Realty. "All loose glass was removed [and] plywood was put up on the impacted balconies until they were repaired," she says.

Because it happened in back, not on the public side, little notice was taken and no litigation filed against the sponsor, a joint venture of the developers Continental Properties and Douglaston Development. "The insurance company agreed to pay for some of the damage," says Moy, and the Department of Buildings (DOB) gave its all-clear after repairs were made.

Later that year, it happened again, also in back. But on July 1, 2009, a glass balcony panel slammed onto the sidewalk along Fifth Avenue.

"People were running," Muhammad Ashsaq, proprietor of the souvenir shop next door, told one newspaper. "Two people were hit and they ran into the building. The police came and shut down the whole street." This time the DOB would come in with metaphorical guns blazing. "I think I heard about it on the news," remembers Moy. "My first thought was, ‘Oh, crap.'"

The New York City police, fire, and buildings departments all responded. The resident manager wasn't there when the accident happened, but the managing agent at the time, Arthur Ostafin (now a vice president at Brown Harris Stevens Residential Management), rushed over. The board's attorney, Jeffrey M. Schwartz, a partner at Wolf Haldenstein Adler Freeman & Herz, recalls collaborating with Ostafin on an e-mail sent to the board that same day. "Staff secured the open space on the balcony where the missing glass was," it read in part. "The insurance carrier was placed on notice of the incident."

The board and its professionals held an emergency meeting the next morning. The developer, holding four of the board's seven seats, sent a representative. By noon, Ostafin was in touch with Tim Lynch, head of the DOB's forensic engineering unit. The two would remain in daily contact, as everyone struggled to determine what had caused this third accident, who was responsible, and — its corollary — who would pay to get it fixed. 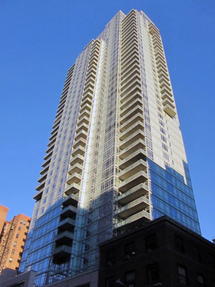 For Whom the Agreement Tolls

In the meantime, the board was keeping unit-owners informed. Additionally, the board and the sponsor signed a "tolling agreement," a common legal tool that by mutual consent stops the clock on any statute of limitations for filing a lawsuit, giving both sides an extended opportunity to investigate an issue and review their claims.

Apartment owners, not surprisingly, were upset. "It's a brand new building," explains Jennifer Granda, vice president of Cooper Square and the condominium's present manager. "People bought these expensive apartments and suddenly had no balconies to use."