Coliseum Park Apartments is a pair of modest, 14-story brick buildings behind the Time Warner Center (the site of the old Coliseum), near Columbus Circle. A co-op since the 1980s, it recently went through a complicated, multimillion-dollar renovation of its  hallways and lobbies — because "according to real estate agents and property managers," says Dan Lansner, an architect and a principal at Chadwick Lansner Design, such renovations "stabilize or raise the value of apartments" without any having to alter the apartments themselves.

But to take on such a fraught project, every co-op and condo board must summon three qualities: planning, diligence, and follow-through.

When Geoffrey Kovall bought into the 600-unit co-op in 2005, he noticed that wallpaper was peeling in the hallways and the lobbies looked tired. Not to worry, he was told.

"One of the comments at the closing was that it will be renovated," says Kovall (pronounced Ko-VAL), who runs a New Jersey company that supplies golf courses. "A year later, not a lick of work had been done. As I looked into it I realized that one of the problems was that the board couldn't decide just what to do. There was nobody on the board with a design or interior decorating sense, nobody in the construction trades. No one felt comfortable overseeing this kind of project."

One of the board's most far-

sighted moves was to survey

the shareholders to see what

they wanted from the renovation.

When a board member resigned in late 2006, the board named Kovall to serve the remainder of the term. He was then elected in 2007 and served until 2011, part of that time as treasurer. He also chaired the renovation committee. And he brought something greater than business acumen to the job: He has a fine arts degree from Syracuse University, experience working as an illustrator and animator in advertising, and a history of volunteer work at the Metropolitan Museum. After joining the board, he was selected as chairman of the three-member renovation committee.

Secrets of the Renovation 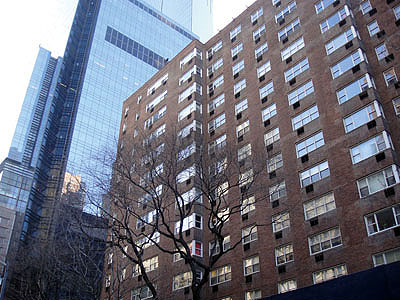 By then, the other board members had been running some numbers. The co-op had $7.5 million outstanding on its mortgage, which is due to mature this year. A stiff $1.5 million prepayment penalty ruled out refinancing. But because of a low ratio of debt-to-value, the board was able to get an unsecured $3.2 million loan to cover the hallway and lobby renovations.

Master All You Survey

One of the renovation committee's first — and most far-sighted — moves was to circulate a survey to all shareholders to see what they wanted from the renovation. The committee was looking for "general feelings" rather than specific design proposals, Kovall says. From the responses, the committee was able to ascertain that the primary concern was enhanced lighting in the hallways, and there was a pronounced preference for carpets and wall coverings in earth tones, "something not necessarily trendy but something that would endure."

The board hired Chadwick Lansner Design, a company with extensive experience in hallway and lobby renovations. Using the survey results and information gleaned from other buildings that had undertaken similar projects, the firm produced a design. The renovation committee passed it along, enthusiastically, to the full board. 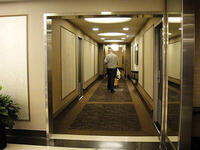 The board members liked what they saw — and then made another smart move: They presented the approved design as a fait accompli to all shareholders at the 2008 annual meeting. Says Kovall, "The advice we got from our contractor [JMPB Enterprises], our design firm and other buildings that had done similar jobs was that if the shareholders get involved in the design, the project would grind to a halt whenever there's a change order about the color of wallpaper. Buildings that went to pure democracy wound up in trouble."

Then, the unexpected happened. The custom-made carpeting for the hallways (see above; click to enlarge) turned out to have what Kovall calls a "most unusual" manufacturing defect. When it was laid on the floor, the carpeting appeared to have an unexpected stripe running through it. When the board complained, it learned that the manufacturer was in the process of merging with another company, which further complicated negotiations.

This unpleasant surprise got a lot of people's blood boiling, but Kovall opted for a cool-headed approach. "I had to head off the lunatic fringe that says, 'Sue 'em!'" he recalls. "My position is to get it done without litigation."

Next page: Making the lobby not look like a bathroom >>