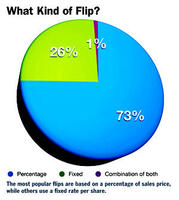 May 17, 2011 — A growing number of co-ops are considering creating or expanding flip taxes as they struggle to replenish reserve accounts depleted by rising costs. An exclusive survey commissioned by Habitat found that close to two-thirds of responding co-op boards already have what's colloquially called a flip tax — formally, a "transfer fee" — in place. Here's what we learned -- which might provide statistical ammunition your board might need to convince your residents to go along.

A total of 186 co-op boards responded to the Habitat survey. (Click on image to enlarge.) Of those, more than 129 charge some kind of transfer fee or administrative fee paid by the seller of a co-op apartment when the unit is sold. The survey focused on cooperative apartment properties, since flip taxes are still extremely rare at condominium properties.

Some boards have resisted the temptation: More than 57 boards, close to a third of the respondents, report that they do not charge a flip tax.

Such resistance was especially strong during the real estate boom. Many new co-op shareholders treated their apartments as investments, and fought anything that would cut into their yield. "People would say, ‘Oh you're crazy! How dare you?'" recalls Steve Greenbaum, director of property management for Mark Greenberg Real Estate.

As property values fell, most shareholders became less focused on short-term profit and more focused on the long-term capital needs and the financial stability of their home.

"People who sell always question the flip tax; people who stay never do," says Kirby Lindell, vice president of the board at Long Island's Bell Park Manor Terrace, an 850-unit property that has had an aggressive flip tax in place for two decades.

Rising property taxes and fuel costs make it more difficult for co-op boards to find money to replenish their reserve accounts. But reserve accounts still need to be full to pay for capital expenditures like new roofing or brickwork. If the money isn't there, the co-op board might have to raise the monthly maintenance charges. A flip tax can be a useful alternative.

"A couple dozen of our buildings may be looking at the issue," says Dan Wurtzel, president of Cooper Square Realty, which manages 400 properties totaling more than 60,000 cooperative, rental and condominium apartments.

Flip taxes don't have to have a negative effect on property sales, provided the fee is not more onerous than flip taxes at comparable properties, according to local real estate brokers. One co-op board on the Upper West Side proved the point by studying 10 comparable doorman buildings within 10 blocks of their own property. "Sales prices at our building were not any better because we had no flip tax," says Greenbaum.

Still, creating or changing a flip tax is difficult. Most cooperative properties require a super-majority of two-thirds of shareholders to vote in favor of it. That can be hard to come by, especially considering that two-thirds of the owners might not even attend annual meetings or return mail-in ballots.

Once a co-op board decides to consider a flip tax, there seems to be broad agreement about what type to institute. "Two percent of the total sales price of an apartment seems to be the number that everybody likes," says property manager Gerard J. Picaso, president of Gerard J. Picaso Inc. This percentage seems high enough to make a positive difference to  a building's reserve account and small enough to feel manageable.

Other options include a two percent flip tax on the profit taken by a co-op seller. In such a situation, if an owner bought the apartment for $400,000 and sold it a few years later for $500,000, the transfer fee would be a percentage of the $100,000 profit.

Property managers warn that this type of flip tax can become complicated if sellers are allowed to subtract renovations or other expenses from the profit. Sellers often claim to have spent thousands of dollars years before, though they may not have receipts, and it may not be clear which improvements qualify. "You have to explain that painting the apartment doesn't count," warns Picaso.

Other co-op boards may consider a flip tax based on the number of shares sold in a transaction. The sale of an apartment that represents 40 shares will generate the same flip tax in good times and bad. However, this kind of flip tax is still vulnerable to real estate recessions in which fewer apartments are sold overall. It also does not account for inflation.

Consequently, some boards are attempting to change it. "We tried to do it twice," says Stanley Greenberg, an accountant and board member for the 1,024-unit LeHavre on the Water co-op in Whitestone, Queens, with a flip tax of $1 per share, or a maximum of $800. That might have been a lot of money back in 1984, when the building converted. But it's nowhere near enough to pay the $35 million cost of recent repairs and construction.

Next page: The type of flip tax that spells "fiscal suicide" >>