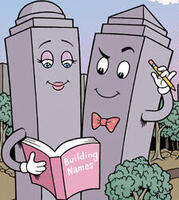 Oct. 26, 2010 —  You live at 123 Main Street. Booorrrr-rinnnnng! You live at The Ansonia! The Dakota! The San Remo! And it's not just such luxury buildings that have names: So do many regular co-ops and condos, either to evoke a feeling (Towers on the Park), or for historical or memorial reasons (Harriet Tubman Garden) or — as more and more co-op boards and condo associations are becoming aware — as a virtually cost-free way to "brand" your building, as marketing people say, and promote your co-op or condo.

"It's a way to make your building stand out to people who want to buy an apartment there and to call attention to it in a positive way," says Steve Wolgast, a former co-op board president of 447 Fort Washington Avenue in Manhattan, who helped restore the building's long-forgotten original name, The Pinehurst.

There's a reason that virtually all new residential developments in New York City have names — developers aren't dummies. And for existing co-ops and condos, says Steve Greenbaum, director of  property management at Mark Greenberg Real Estate, "anything we can do to improve marketability and give the building a little edge is helpful."

The Pinehurst, For Example

"We'd been doing a lot of research on the building for its 100th anniversary in 2007," explains former Pinehurst board member Rita McKee "We weren't able to find the original building drawings, but at the New York Public Library we found a book about New York City apartment houses with an original [1908] advertisement for it as 'The Pinehurst.' [below; click to enlarge] We had [a copy of the ad] up in our elevator for awhile so people could see it." The residents in the 43-unit building soon agreed to re-adopt the name. 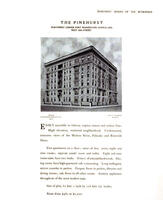 Greenbaum himself has been involved in the naming of — the branding of — buildings including Manhattan's The Sterling cooperative at 209 East 56th Street and Hardenbrook House, a condominium at 404 East 66th Street.

"It just seemed to have a better cache and gave the building a better viability as being more upscale," Greenbaum says of the latter, noting that the historically apt name comes from that of the 20-acre Hardenbrook Farm that in the early 19th century spread from what is now East 64th to 66th Streets between Third Avenue and the East River.

So let's say your co-op or condo board is considering naming your building. How do you go about finding the right moniker? Are there legal ramifications? What's the best way to present the idea to your shareholders/unit-owners? And what do you do with a name once you have it?

Put it on staff uniforms, for one thing — which, paradoxically, provided the reason for The Sterling getting a name. The 106-unit co-op was looking to buy new uniforms, "and this building had a particularly long street address," recalls Greenbaum. "We'd be writing the address across their chest and up their arm. We figured a short name would look a loot better." The building, he says, had talked about acquiring a name "for a couple of years" before.

"The trick is to come up with a lot of names and then whittle down the list.," says Athol Foden, founder and president of the Northern California branding and marketing firm Brighter Naming, which specializes in building names. "To me, 'a lot' starts at 100 and goes up. I tell clients, 'Remember, we're not picking the final name today. We're just trying to shorten the list.' Then, after you do that, you polish the names and blend names."

We didn't want to do anything with

it'd be too militaristic.

At what became The Sterling, board member James Marotta solicited names as part of a four-page building newsletter. Concurrently, longtime board president Mary Ann Savarese e-mailed residents for name requests. They received 30 responses, including The Chateau, The Larchmont, The Scarsdale, and "bizarre names like The Honolulu, The Bermuda, and The Bartholomew," says Greenbaum, along with the board's eventual three finalists: The Prestige, The Sterling, and The Sutton Grand.

"We didn't want to do anything with 'Arms,' because people thought it'd be too militaristic," Greenbaum says.

Marotta distributed ballots with the finalists, instructing residents to choose their favorites in order and to write down any strong objections they might have to a particular name.

Simple and straightforward, right? Not so much, as it happened. Residents called and e-mailed to complain, and one of them even showed up at Marotta's door. Another got 20 signatures on a petition to find more names. Some objected to Sutton Grand since the building isn't on Sutton Place. Others didn't feel the building was prestigious enough to be named The Prestige.

The board solicited another round of names from residents, yielding 13 more for a total of 43. Although a new name, The Ashton, made a good showing in a second heat voted on by residents, says Greenbaum, the votes ultimately went to The Sterling. "Nobody can say they weren't part of the decision," says Greenbaum. "Everybody got a vote and a big majority was in favor of that name. We didn't hear any uproar like, 'Oh, my God, The Bartholomew, I don't want to live in the Bartholomew.'"

Next page: Can you name your building "Trump Gardens"? >>