June 25, 2010 — A bill in the New York State legislature to mandate disclosure of bed bugs (a.k.a. bedbugs — creatures so annoying they make you spell them two ways) has made it through both the Assembly and the Senate, and awaits Governor David Patterson's signature to make it law.

What does it mean for co-op boards and condo associations? For the latter, nothing. For the former? That's hard to tell. Most rental-law provisions affect residential cooperatives since co-ops operate under a proprietary lease and so shareholders are technically tenants. A legislative source familiar with the bill, speaking on condition of anonymity, had no definitive answer — at first suspecting that the phrase "vacancy lease" meant it applies only to traditional rental apartments, but then saying, after investigating, "I'm now getting conflicting info on the co-op answer."

Here's the background: Assemblywoman Linda Rosenthal (D/WF – 67th District) (below), who represents Manhattan's Upper West Side and part of Hell's Kitchen, introduced the two-bill legislation in April to help fight the well-documented rise in bedbug infestation across all strata of New York City residents. 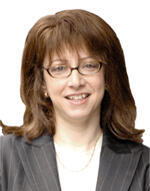 The first bill, A. 10081, was a personal income tax credit that addressed the fact that bedbug victims usually suffer a significant financial hit from the cost of replacing furniture, bedding, clothing and other belongings – because unfortunately, bedbugs are so hard to eradicate that the most common tactic is to simply get rid of what's infested. The tax credit would cover 15 percent of property purchased to replace discarded items, up to a maximum of $750 per person.

This bill didn't make it, through. As one legislative source put it, "It was a difficult lift, and it might have done better in a less dire fiscal environment. But it did help move [the other bill] along."

That other bill, A. 10356, grants prospective tenants and homeowners the right to a record of any bedbug infestation at a property. Senator Jose Peralta (D/WF, Queens) sponsored the Senate version.

An amended version of the legislation was approved unanimously by the State Assembly Housing Committee on June 7, 2010. This scaled back a requirement to tell prospective renters about bedbug infestations that occurred over the past five years, instead limiting it to the past year. It also removed a requirement to tell prospective renters about infestations in apartments other than the one being considered, to address residents' privacy concerns, although infestations in common areas must still be disclosed.

The New York State Division of Housing and Community Renewal (DHCR) would enforce the law.

"I am gratified that we have finally woken up to the plague of bedbugs in New York City and the entire Eastern Seaboard,” said Rosenthal today. "By passing legislation allowing prospective tenants to find out if their individual apartment or apartment building has had any bedbugs in the past year, we are giving New Yorkers the opportunity to make informed choices and fight back against the fear and disgust that bedbugs engender. As this law is implemented, I stand ready to assist my constituents and ensure that tenants are provided quick and comprehensive bedbug histories from their future landlords."

Fighting Bedbugs on a Second Front

A separate, unrelated bill sponsored by Peralta (at right), S. 7316B, would disallow the term "new" for bedding that was returned to a retailer within 30 days; require bedding labels to include notices that the bedding was used and sanitized, and the manner of sanitization and chemicals used; require annual inspection of bedding manufacturers; and institute changes in the way used bedding is transported, stored and sold. The Senate passed this bill on June 15, and the Assembly version, A. 7691 , sponsored by Nelson Castro (D – 67th District) of The Bronx, passed afterward. This legislation now also awaits the governor's signature.

State Senator Bill Perkins, one co-sponsor of this second Senate bill, said earlier this week, "The legislation approved by the Senate would help get rid of these unwanted insects by eliminating cross-contamination between infested furniture, particularly second-hand bedding, and new mattresses -- one of the leading contributors to the spread of bedbugs. This measure requires the sanitization of second-hand bedding, and prohibits used bedding that has not be sanitized from being transported, stored or sold with new bedding."