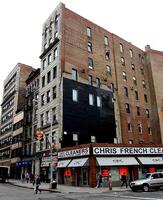 That's the amount of fines the city levied against 59 Fourth Avenue (at right), in Manhattan's Greenwich Village, for two years of illegal billboard signage. (Click on image to enlarge.) And though that figure is divided among the co-op there and the two companies that brokered and mounted the hanging vinyl billboards for the movie Twilight, TV's King of the Hill and Boost Mobile phones, it's still an enormous sum for any co-op or condo board to absorb.

How could it happen? How could a co-op board, working with an established outdoor-advertising firm, not know better – and then compound matters by not removing the sign and instead hunkering down and letting fines and fees accumulate? Most important, what can the co-op's mistakes teach other boards looking to billboards and other advertising signage for revenue?

Lesson one: Don't believe everything an outdoor-advertising company promises. "A lot of people will tell you a lot of things to get you into a business deal," says an official at one such firm, who requested anonymity. "You have to do due diligence on your own." Adds Carly Sullivan, a Department of Buildings (DOB) spokesperson: "The property owner may not even realize they need to get a permit – and they're not necessarily told by the outdoor advertising company."

And some co-ops themselves may not care. "You could be receiving fines but actually make money at the end of the day," observes Jeff Peyser, board president of the 208-unit co-op at 433 West 34th Street, which decided against signage. "I'm not recommending this," he quickly adds. "But I've heard of this happening."

That might have been easier before the DOB's "Rule 49" went into effect August 25, 2006. That regulation formalized how the previously passed Local Laws 14/2001 and 31/2005 would be carried out, and established both a sign-registration process and new enforcement procedures that included penalties ranging from $5,000 to $25,000 per day in addition to forcible sign removal and other penalties.

"It's important for property owners to realize there are regulations about signs," says Sullivan, "and that you need to get a permit to install a sign, and that you can be subject to significant fines for violations."

In 2007, the DOB's Environmental Control Board (ECB) began fining the eight-story co-op at 59 Fourth Avenue, and also OTR Media, the outdoor-advertising firm that paid $5,000 a month for the right to lease billboard space on the building. The area isn't zoned for billboards, and in any event, the co-op hadn't obtained permits. (The ECB also fined the subcontractor that physically mounted the ads, Brooklyn's Ladder 3 Corp.)

Yet rather than comply by removing the billboard and, if it felt the need, contesting the order, the co-op thumbed its nose at the city. A billboard remained up through at least March 2009. (It had been taken down by late October, when the photo above, which also shows a long-faded sign from many years ago, was taken.) The $955,000 in fines remained open pending a hearing.

You need to get a permit – and

you're not necessarily told that by

Patrick Curley, board president of the Fourth Avenue Loft Corp., did not respond to messages left on voicemail and with a person who answered his phone. Neither was a managing agent available: The co-op's corporate address is the same apartment as that of Curley and of a third entity, the Fourth Avenue Management Corp. And Ari Noe, the CEO of OTR, agreed to answer questions only by e-mail, and then reneged.

The first and most important step in exploring signage is to see if your area is zoned for it. In many parts of the city, particularly those places where an ad might face a major highway or a park, billboards are forbidden.

"Anything regarding signage and land-use issues revolves around city zoning," says Mitch Schwartz, vice president of government and public affairs for the media conglomerate Clear Channel Outdoor, one of the largest outdoor-advertising companies in the nation. "If the zoning is right, a building has the opportunity to put up signage. If the zoning doesn't allow signage, no. … The city is pretty good at walking you through it."

The DOB does have several resources online, and the Department of City Planning has zoning maps. But Mary Cosmark, a partner at Rosen, Livingston & Cholst, cautions: "You need a zoning expert, beyond just a trained lawyer," to read them. "The zoning resolution is extremely arcane and it's amended pretty often, so you have to be familiar with all the amendments as well as the standing regulations. It really requires a law firm that specializes in land-use issues."

Jesse Masyr, a partner in Wachtel & Masyr, one such firm, agrees that "the zoning-map site isn't really a user-friendly document, and it doesn't have an index." But, he believes, "a reasonably intelligent person could learn to read them."

Once you've determined your area is indeed zoned for billboards, the next step is to find an outdoor-advertising company (OAC). New York City makes this part easy: Such companies doing business here have to be registered with the city, which keeps a public, online list of names, addresses, and phone numbers, the "DOB Sign Registration Program OACs."