Bud Harrelson, one of the New York Mets' most storied shortstops, who played on the 1969 World Series team and was a coach of the 1986 championship squad, helped host the ribbon-cutting ceremony with Hercules president Andrew May and sales vice president Mark Eisler, and New York City Ronald McDonald House president and CEO William T. Sullivan.

The idea originated, says May, "at [charity-benefit] golf outings with David Lipson of the Children's Happy Faces Foundation," a Long Island philanthropic organization that works closely with Ronald McDonald House and the Make-a-Wish Foundation. Lipson, director of the mortgage division of Century Management Services, was recently named Humanitarian of the Year by the New York Association of Realty Managers (NYARM) for his work as volunteer treasurer of Children's Happy Faces.

The donation, which includes a lifetime service contract, "came together at the dinners we'd have at the golf outings," says May, referring to the annual Children's Happy Faces charity golf events, the next of which take place at the Sleepy Hollow and Trump National courses on Oct. 6. "It was a no-brainer," May says. "It was just one of those things that fit." 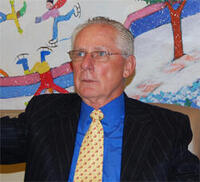 The Maytag washers and dryers are environmentally friendly, high-efficiency models rated "Tier 3" by the Consortium for Energy Efficiency. "That's the highest tier you can get," he notes of the CEE's "Super Efficient Home Appliances Initiative."

Harrelson, who lives in Hauppague, N.Y., near Hicksville on Long Island, says, "I'm happy I made this connection. It's a small world sometimes. Some things are meant to be. If you say no, you'll never know."

The local Ronald McDonald House, at 405 East 73rd Street, accommodates 84 families, and is filled to capacity almost every night. "It's a great organization; it really is," says May. "Families get uprooted from their homes" when they need to spend days or weeks in another city where their children are being treated for life-threatening illnesses. "I'm very, very glad to be able to help" with something one might call, we suppose — being that humor is the best medicine — the make-a-wash foundation.