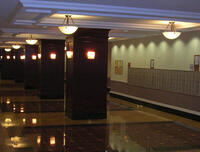 "That was her exact word," designer/architect Andreas Letkovsky says the managing agent of the three-building, 490-apartment Atlantic Towers cooperative in Brooklyn used. "Beige on beige. No drama. The materials were extremely worn out and there was a safety hazard, since parts of the carpet were buckling." But after a relatively reasonable $1.3 million renovation of three lobbies totaling roughly 10,000 square feet, the results make these entrances to the Sheepshead Bay co-op look, well, Bay-utiful. (Click on image to enlarge.)

Lobby renovations are, of course, the bane of a board's existence. The average resident may have no opinion on the best way to do brickwork or install flashing, but when it comes to whether the lobby should have paint or wallpaper, recessed lighting or no, or where to put the credenza — well, as Letkovsky, of Andreas Letkovsky Architecture on Long Island, puts it with a knowing chuckle, "Everyone sees beauty through their own rose-colored glasses."

In the case of Atlantic Towers, though, beauty took a backseat to safety, like a Volvo, at least in the beginning. Two years ago, says property manager Arlene Stern of Vintage Real Estate, "The carpeting and the floors in the lobby were not level, and so the carpeting had to come up and new floors had to be put in. And the board said it would advantageous and increase the value of Atlantic Towers to refurbish the lobbies" while making these safety upgrades.

That posed a challenge, since the lobbies looked like they hadn't had serious refurbishing since the building went up in the Sputnik era, back around 1958 to 1960. (Click on image at left to enlarge, click again to close.)

"The finishes were very dated and there was lackluster appeal," Letkovsky says. "It appeared as if there were a minor renovation consisting of applied molding and some mirrors and things like that. It looked like a handyman's attempt at refurbishing the lobbies. There was noting in terms of a substantial level of creativity. Everything looked sort of homemade."

Their Wish Is Granite

Letkovsky, working with Stern and board members Jaime Diaz and Frank Reda primarily, suggested sending the carpet flying and installing granite tiles, which aside from looking classically elegant would resist scratches and other damage and involve less upkeep that would many other materials. He choose mahogany for the columns since it's a durable yet reasonably price hardwood.

Once the granite was selected, says Stern, the nine-member board chose colors for the walls, based on Letkovsky's suggestions. Among the other improvements and additions were chair rails; new lighting and stairwell doors; and coffered ceilings, meaning ceilings with recessed panels. "The granite-slab floors feature decorate medallions that align with the ceiling coffers above them," Letkovsky says. The concierge desk in the biggest lobby was moved not only to get a better, more functional flow, but also "to maintain the authority of this security desk." Omni Construction of Flushing, N.Y., and CFC Commercial Flooring Contractors Corp. of Northport, Long Island, were the primary contractors.

The overall look Letkovsky went for, he says, was "a timeless design that we felt would not be susceptible to falling in and out of style. We were very careful in what we proposed so that it wouldn't look odd in five or ten years. We felt that, given the people who live there and [guidelines from] the board, that we wanted longevity, so we chose a traditional, classic motif."

Next page: When Board Members Discuss! >>