OLD BOILERS: REPAIR OR REPLACE? LESSONS FROM ONE CO-OP'S EXPERIENCE

> OLD BOILERS: REPAIR OR REPLACE? LESSONS FROM ONE CO-OP'S EXPERIENCE

Old Boilers: Repair or Replace? Lessons from One Co-op's Experience 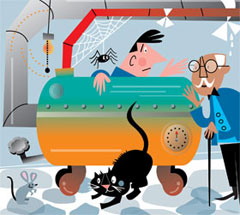 When it came to the boiler, things were coming to a boil at 49 West 12th Street in Manhattan. The 53-year-old boiler, installed when the building was erected, was limping along and costing thousands of dollars in emergency repairs. The chimney was also starting to crumble, and because of a problem with the burner, the system was coughing up black smoke, costing the building several city fines.

Then Arlene Martin, board president at the time, attended a co-op expo and stumbled across a small booth tucked in the corner. "One of the guys shouted out, 'Hey, lady — we can save your building money,' " Martin recalls, describing how she came across the New York State Energy Research and Development Authority (NYSERDA). "I never forgot those words."

That chance encounter led 49 West 12th to embark on an energy-efficiency project that will indeed save the building money; a recent analysis shows that the building using 11 percent less oil than before. The board members ran into difficulties along the way, but the lessons they learned can benefit other boards and management agencies.

Bob Horstmann, owner of the Bronx-based Marlande Heating, the building's longtime contractor, says the aged boiler was not in terrible shape. The burner, on the other hand, was "literally falling apart" — and it was virtually impossible to get replacement parts for the ancient system. "They were putting Band-Aids on a major artery and they were getting concerned about that," he says.

A new burner could probably have been installed for $40,000 to $60,000, Horstmann adds, but it was only a matter of time before the boiler itself went kaput. The board, after getting connected to NYSERDA, took out a low-interest "Energy $mart" loan through the agency in order to buy a new energy-efficient boiler, install a new chimney and upgrade the hallway lighting to make it more efficient as well.

The plan was to take out a 10-year, $200,000 Energy Smart loan at one percent interest. The boiler project would cost $181,000 and the chimney $23,000. The hallway lighting would cost $13,200 to be upgraded from traditional florescent to a more energy-efficient type that would use about 20 percent less electricity.

The board hired EME Group to conduct an energy audit, as required to secure the Energy $mart loan. Neville Burrows, principal of EME, says the building at the time of the audit had spent $14,000 in boiler maintenance over 20 months. The boiler was running at about 77 percent efficiency, a level below the generally acceptable 82 percent. "But the bigger issue," he says, "was the black-smoke conditions" caused by high oxygen levels, an indicator of inadequate combustion. The building would spend $19,855 from its reserve funds to pay for the audit and a NYSERDA fee, which would eventually be refunded.

The process, however, had dragged on for two years to summer 2007, and the NYSERDA loan had not yet come through. It would cost additional thousands to keep the boiler running through another winter, not to mention the cost of potential fines from more black-smoke incidents. Ryan says the solution was one that is hard to imagine: Marlande would start the work before being paid any money.

"Marlande did this because of the relationship they have with Picaso," Ryan observes. It's a point that other boards should note, he says, adding: "You don't want to have an arm's-length relationship [with] the board and the manager and your contractors. You have to go the extra mile to create a good relationship."