June 5, 2009 — The talent that comes through Habitat amazes even us sometimes. Our art director, Michael Gentile, who was one of the founding staff of the alternative weekly New York Press, has helped to find and nurture such noted illustrators as Marcellus Hall, Danny Hellman and Jane Sanders — whose work appears, in addition to Habitat, in such prestigious publications as The New Yorker (including Hall's Dec. 15, 2008 cover, “Green Christmas"), Time, Newsweek, The Village Voice, Sports Illustrated and Entertainment Weekly.

You've seen their work here as Habitat covers and feature illustrations. Now see it, for the first time, complete and without text and graphics. Beautiful stuff, we're sure you'll agree — and for co-op and condo boards who recognize the situations they depict, every picture tells a story. First up is Manhattanite and co-op owner Hall....

Hall, 45, was born in Minneapolis and attended the prestigious Rhode Island School of Design. After obtaining his BFA, "I just began sending out postcard mailers to addresses of magazine art directors, which I would get from leafing through magazine at newsstands. Mike Gentile was actually one of the first people to hire me. He was working at New York Press then; he actually hired Danny [Hellman] and Jane Sanders and a lot of other people, even people in the comics world, like Charles Burns. It was exciting. Mike had an eye for up-and-coming artists." 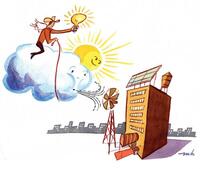 The most challenging thing about illustrating for Habitat, he says, is that, "Often you have to anthropomorphize a building. That's always tricky for me — not the actual drawing, but the idea." That said, "One of the nice things is I feel there's a lot of freedom. Mike allows me to try different things, and that's always good. We have to get the point across, but he's pretty flexible. I feel almost more liberated with a magazine like Habitat because I feel like I can be free to take more risks."

Hall, who's also a musician who has toured and released albums with the bands Railroad Jerk and White Hassle, and continues to perform solo, recently illustrated two children's books — Because You Are My Baby (2008), by Sherry North, and City I Love (2009), by Lee Bennett Hopkins, both published by Harry Abrams — and has for years produced self-published mini-comics. He's currently working on what he describes as "a sort of graphic novel."

For the last six years, Hall has lived in a co-op in a neighborhood he half-jokingly calls "Tribedel" — meaning Triangle Below Delancey Street, a la "Tribeca," which has long stood for Triangle Below Canal Street. "Sometimes I illustrate my own co-op when I do illustrations for Habitat," he says. "Sometimes I'm reproducing exactly my building and sometimes the type of people who live here."

And will he ever serve on his board? "I haven't got around to thinking about it yet!"

Here and on the next page are some of Hall's Habitat images. Click on any to enlarge.