It started with a phone call saying bedbugs (also spelled "bed bugs") had been found in a Manhattan co-op apartment. And then, in two more units. Fumigation was needed — and the extensive problem required an unusual solution.For Paul Brensilber, president of the co-op's management company, Jordan Cooper, that meant the Fume Cube.

It's not something out of Star Trek. It's simply a large box made from insulated panels that can be constructed into a variety of sizes. The Fume Cube is then placed outside, either on a roof or in a courtyard, all the items from a bedbug-infested apartment are placed within, and sulfuryl fluoride gas is pumped in. That gas consumes the oxygen, and the bugs die.

"The gas is 100 percent effective against all stages of bedbug life," says Tyler LeCompte, national sales and marketing executive for the Florida-based Bed Bug Fumigation Specialists, the company behind the Cube. Its staff monitors the amount of gas to ensure it remains at bug-killing levels. After a set period of time, usually about 18 hours, the box is opened, outside air is let back in and the gas dissipates. The items must then be aired out for another six hours or so. 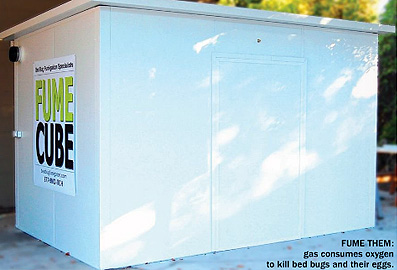 The Fume Cube has been used about a dozen times in New York City since 2009. In other parts of the country, sulfuryl fluoride gas can be used to treat pest infestations in fully encased single-family homes. But that doesn't work in New York City apartment buildings. because in order for the gas to be effective and safe, an airtight seal must be created — a veritable impossibility when buildings are connected to each other and there are substructures and basements.

Another option is for co-op / condo owners to have your belongings gassed off-site, You can hire a company specially trained to pack and move your infested belongings into a moving truck, or you or your super can pack and move the items into a truck you've rented.

Using the Fume Cube on your building's roof or in the courtyard costs about $1,000 per fumigation. LeCompte says an 8-foot-by-12-foot cube can handle the items from a one-bedroom or a small two-bedroom apartment. If Bed Bug Fumigation Specialists is fumigating a truck, the costs range from about $500 to $1,500, depending on the vehicle's size.

There are additional costs. Licensed pest-control movers must be familiar with how to pack up items and transport them to the cube. Additionally, a pest-control company must come in to treat the empty apartment, usually with a combination of vapor steam heat, caulking and sealing and chemical pesticides.

LeCompte says the costs associated with that work range widely depending on the amount of items and the building's characteristics (walk-up vs. elevator, for example), but they can range from $2,500 to $6,000.

Tim Wong, director of M&M Pest Control, says standard bedbug extermination of an apartment costs between $700 and $2,500. He says Fume Cube-style fumigation could be appropriate with very extensive infestations or when the infested objects include things very difficult to treat with heat or chemicals, such as paintings or electronics.

But Wong says that if the Cube is placed on a roof, he would be concerned about a possible leak and whether the gas could make its way into a neighboring apartment. "It's not something that I would recommend for my clients because I can't be assured it would be safe," he says.

LeCompte, in response, says his company monitors the gas to ensure the cube is airtight for safety and for efficacy and that none of the Cubes used so far have leaked. He notes that the company is a licensed fumigator in both New York and New Jersey and also reports that the gas naturally dissipates in the outside air, so that it becomes "almost untraceable within minutes." The company does not place the cubes near intake vents, and the Cube itself is on a raised platform and not directly on the surface of the roof.

According to Dow AgroSciences, the company that makes Vikane, one of the brands of sulfuryl fluoride, the chemical has been used for more than 40 years to treat termite and beetle infestations, and about 100,000 structures are treated annually with the gas.

Thinking Outside the Cube

LeCompte says another option beyond using the Fume Cube for an active infestation is for condo and co-ops to purchase it as part of a general pest-management plan. Anything that is brought into the building — from a new tenant's belongings to a furniture delivery — would have to go into the Fume Cube before it can enter the building. "The big part of the bedbug problem is not so much a bug inside, it's the bugs that are on their way in," he says. "The pandemic is because of the ease of travel and the way that people and our stuff move around."

Next page: Should Co-op / Condo Boards Consider Buying One to Keep? >>