SHOULD BOARD MEMBERS BE PAID?

> SHOULD BOARD MEMBERS BE PAID?

Should Board Members be Paid? 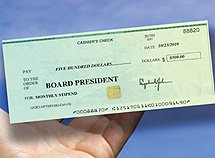 July 12, 2011 — Mark Hankin was appalled. As the attorney for a Queens co-op, he was invited by board members to their annual "getaway weekend" – alternatively called the "Thank You Retreat" — where the directors rewarded themselves for a year of hard work by spending a week in the Catskillls, at a price tag of $5,000. "We earned it," the president said to the attorney.

"This is not acceptable," Hankin, a partner at Hankin & Mazel, recalls saying to the president. "Serving on a board is a volunteer position, as in ‘no pay' and ‘no thank-yous.' Once you look to make a profit from this position, then you are looking for trouble. I think it's a terrible idea, and it would only be acceptable if the shareholders voted to give a weekend retreat."

Alan Bentz-Letts, the former board president at Parkway Village, would probably agree. After the board made one of its members the manager, Bentz-Letts wrote a letter to the directors protesting. The member intended to keep his board position and serve as a salaried agent for the property as well. Bentz-Letts labeled the employment a clear conflict of interest at the 109 low-rise brick buildings located on 37 acres in Kew Gardens Hills. His remarks, however, fell on deaf ears.

But was it as clear a conflict as all that or simply a recognition of realities? Many people don't want to do something for nothing anymore. So why are professionals and most board members dead set against the notion of paying for board service?

"I don't think it's appropriate. Most bylaws prohibit it," says Arthur Weinstein, a veteran co-op and condo attorney. "It might create the wrong incentive for a person to serve on the board. They'd be serving for the money rather than for the good of the building. And I don't think you could ever compensate people fairly for the amount of time they put in. It would be inadequate."

"It doesn't seem ethical from the outside," notes CPA Jay Menachem. "The board isn't supposed to make money off the building operation — to take compensation for what is supposed to be a voluntary job."

"If they are running for the board to make a financial windfall, then that's the wrong motivation," argues attorney Steve Sladkus, a partner at Wolf Haldenstein Freeman Adler & Herz.

"Board members should not be paid," agrees attorney Matthew Leeds, a partner at Ganfer & Shore, adding unequivocally, "They would be looking at the job for the money."

So what, you might ask, is wrong with doing a job for money? Does a corporate board, aside from most non-profit boards, expect its directors to serve without compensation?

What's stopping more boards from getting paid apparently begins with tradition. The reluctance to offer a salary goes back at least to the 1940s, when the "Model By-Laws," issued by the Federal Housing Association, required that the unanimous consent of the shareholders be sought in order to compensate board members.

But that hurdle can be overcome. Although the bylaws generally prevent compensation for boards (other than reimbursement for money spent), there does not appear to be a city, state or federal statute or regulation prohibiting it if the shareholders/unit-owners agree.

So, should you try compensating your board members? What are the pros and cons of paying for their services? What might be the consequences? The issues raised by professionals include:

Nonetheless, there are boards that pay members for doing work. "These particular boards are not using a management company and are paying far less than they would for a management company," says Menachem. "And they're doing a lot of extra work." He cites a 51-unit condominium in Queens where the board president and the treasurer, two long-time residents and retirees, were compensated by not having to pay common charges, which came to about $500 a month.

Next page:  Some Paid Board Members >>