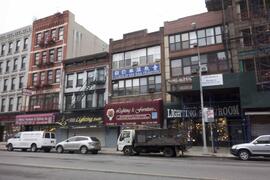 From Flophouse to Penthouse

The Bowery’s makeover keeps marching on. 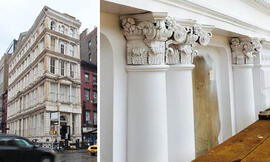 Deep Pockets to the Rescue of a Rusting Cast-Iron Gem

The building at the corner of Bond Street and the Bowery in lower Manhattan began life as a bank shortly after the Civil War. A marvel of cast-iron architecture, it was given landmark status in 1967 before beginning a long decline. By the time a developer converted it to a condominium in 2010, this magnificent four-story gem had lost most of its luster. It was a musty, rusty shell of its original self.

“It still looked beautiful from a distance,” says Jeroen De Schrijver, a Belgian architect whose firm, D+DS, was hired by the condo’s board as project manager and consultant on a major facade restoration. “But once you got up close you discovered the cast iron was rusting, there were pigeons living in the building, there were leaks, rust, missing pieces of cast iron. We realized we had to peel it off layer by layer and build it back.”

... it's deja vu all over in Queens as co-opers prepare for another year's tax revolt. A new state law allows digital offering plans, condo prices are up in the outer boroughs, and why is New York Yankee Alex Rodriguez no longer safe at home at The Rushmore?