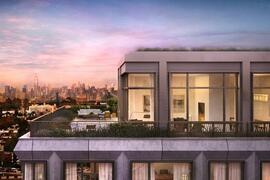 Atlantic Yards Condo on Sale for a Cool $6.8 Million

How times change. It was just August last year that Atlantic Yards was renamed Pacific Park as part of a rebranding effort. Now, a little more than a year later, the first penthouse — one of three condo apartments on the 17th floor of 550 Vanderbilt Avenue in Prospect Heights — is hitting the market at $6.8 million. What do you get? How does 2,859 square feet with a wraparound terrace sound? The luxury building is “now under construction at the corner of Dean Street and Vanderbilt Avenue, [and is] one of four towers currently being built at the 22-acre complex by Greenland Forest City Partners,” according to DNAinfo. No wonder so many folks are getting priced out of Brooklyn.

Rendering of penthouse at 550 Vanderbilt Avenue by Cookfox 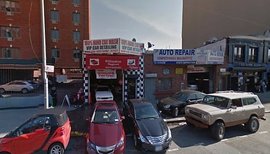 It was more than two months ago that a judge ruled in favor of the remaining seniors left at the Prospect Park Residence retirement facility. Known as one of Park Slope's worst landlords, Haysha Deitsch has successfully forced out 130 residents so he can build an 11-story luxury condo building in its place. Apparently, Deitsch is still at war with the remaining residents. According to Curbed, "a previous deal to sell the building for $76.5 million fell through when the tenants would not leave. He's previously been charged with refusing to turn on the building's air-conditioning, raising the rents, and handing residents eviction notices when they refused to pay increased rents." Regardless of the continued hostilities at 1 Prospect Park West, it looks like Deitsch has plans to build more luxury condos over on Fourth Avenue. He filed building permits at 243 Fourth Avenue last Wednesday, reports Curbed, which indicate an 118-foot-tall, 11-story residential development with 35,500 square feet. There will be 16 apartments total averaging about 2,000 square feet per unit. Citing YIMBY, Curbed adds that the building amenities will include "a pet spa, bike storage, a children's play room in the cellar, and a recreation space on the third floor. There will also be 3,171 square feet of commercial space and a 271-square-foot community facility on the ground floor." 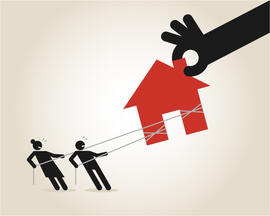 It's no news that the city can be tough on its many residents, but things are about to get much tougher for thousands of properties — co-ops and condos, included. According to The Real Deal, the city has filed "in rem" actions against not just apartment owners but also building owners in Manhattan, Brooklyn, Queens and the Bronx. It's a move that could spell foreclosure for owners who owe taxes. There's still a chance to pay up or set up installment agreements. "The deadlines are September 22 in Manhattan, September 29 in the Bronx, October 6 in Brooklyn and October 13 in Queens," according to the article. And if they miss the deadline, those affected will still have 20 more days from their respective deadlines "to file answers in court." Gulp! 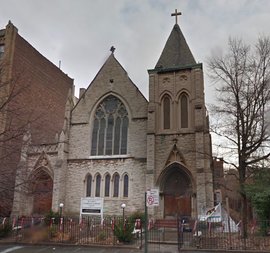 Clinton Hill Church to Be Converted to Condos

It looks like St. Luke's Evangelical Lutheran Church of Clinton Hill is the latest building to be snapped up by a developer with plans to convert it into condos. The Commercial Observer reports that Brooklyn developer Brookland Capital purchased the 145-year-old church for $8.8 million — a record sales price for the year, according to Mark David Fromm, who along with Town Residential colleague Brandon N. Gibson brokered the deal for Brookland. The building is 29,250 square feet and offers 32,000 "buildable" square feet. "The developer plans to extend the building in the back and restore part of the exterior," according to the article.

The Transformation of Brooklyn's Skyline

Brooklyn is changing a lot. Prices are soaring so high they are starting to reach Manhattan-levels, and now, thanks to new development, the skyline is starting to reflect that change. In its most recent Brooklyn New Development report, CityRealty confirms that the skyline is transforming "as developers add tens of thousands of new rental and condominium apartments to the borough." Anyone who still thinks Brooklyn is synonymous with single-family houses need only check out the number of buildings with 20 or more units currently under construction — many of them, says CityRealty in its report, rising 10 or more stories and dramatically changing the built environment. CityRealty also anticipates the pace of building to outpace the previous decade, with nearly 5,000 new apartments in 2016 and nearly 6,000 in 2017. 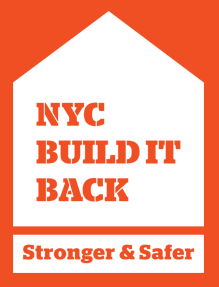 August 1 looms as the deadline for multifamily homes — including co-ops and condos — to submit final documentation to New York City's Hurricane Sandy Build It Back program.

The city-sponsored scheme offered New Yorkers no-payback, interest-free loans to qualified buildings damaged in Sandy's destructive path. To qualify, the structures had to be damaged or demolished. Then their condition had to be assessed (i.e., what needed to be done: rebuilding or demolishing) and a level of funding determined. While registration closed more than one year ago, buildings that submitted an application should be on alert: they have until the end of July to finalize and file eligibility, insurance, and expenses documentation.

Condos in Brooklyn and Queens Stay Hot in the Second Quarter

If you thought Manhattan was the only borough looking good in the second quarter, think again. Late this week, Douglas Elliman released its Q2 report showing Brooklyn and Queens sales figures and they aren't too shabby, either. According to the report, Brooklyn housing prices continued to break records in 2015, including the average sales price for the borough and for brownstones. Rising prices pulled more inventory onto the market, yet supply remained below long-term averages. Douglas Elliman anticipates a fast-paced market to carry on into the fall. Okay, so maybe Brooklyn's figures aren't much of a surprise, but what about Queens? Well, it looks like housing prices there increased, pushing condos to a new record. Median sales prices for condos in Long Island City, for example, soared 29 percent to $998,000. That's good news for these guys. If you're a buyer, though, the news is not so good. The report shows that faster marketing times and less negotiability made it a tougher market for would-be purchasers to navigate. Based on the current market, Douglas Elliman expects similar conditions in the coming quarters.

Take a look at the Queens report (click to enlarge): 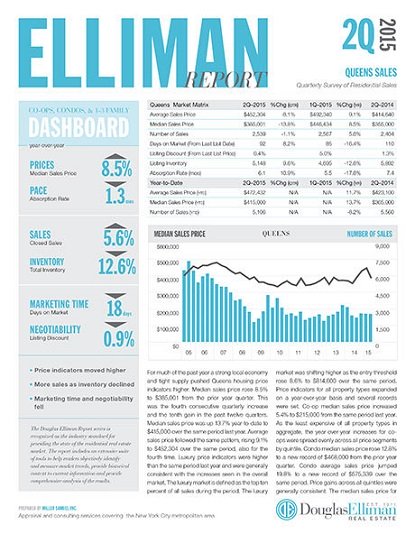 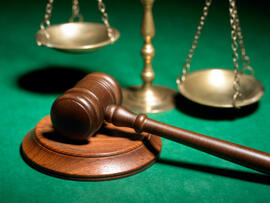 In a city where hospitals are getting transformed into pricey condos and townhouses, it's little surprise that assisted living facilities are up for grabs, too. Location, location, location, right? Just ask the seniors — well, the remaining handful of seniors left — at Prospect Park Residence. Most of the 130 residents left after "being forced out so the building can be converted into luxury condos," reports DNAinfo. But according to the publication, the seven remaining residents, who include a Holocaust survivor and a centenarian, "sued after [the building's owner] abruptly announced that he was closing [the facility], leaving residents just 90 days to find new homes." Sometimes the little guy wins, though. Judge Wayne Saitta "sided with the seven remaining seniors at Prospect Park Residence and threw out a motion to dismiss their case against the facility and owner Haysha Deitsch." According to DNAinfo, Deitch wasn't the only one to request the seniors' case be dismissed. In an announcement praising the judge's ruling, City Councilman Brad Lander said that "the Cuomo administration's New York State Department of Health [also requested] to dismiss the case." For Deitsch, there is $76.5 million on the line — the amount of money for which he hopes to sell the building to developers. For the residents, it's their homes and livelihood. DNAinfo adds: "Saitta repeatedly ordered Deitsch to maintain services at the facility, but residents say those orders were ignored. Recently Saitta had to order Deitsch to keep the air-conditioning on in the building on hot days." New York, New York. What a wonderful town. 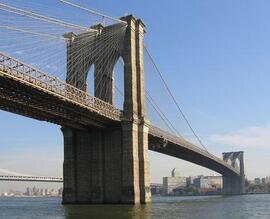 Community Board 5's Sunshine Taskforce isn't the only group fighting to keep super-tall condo buildings from ruining their view. Brooklyn locals have been trying to stop developers Toll Brothers and Starwood Capital Group from building a hotel and condo development "that critics say destroys majestic views of the Brooklyn Bridge." According to the New York Daily News, the group claims that the view of the bridge from the Brooklyn Heights Promenade was supposed to be protected by a deal hammered out with Brooklyn Bridge Park officials in 2005." But their fight came to an end last week, after the Supreme Court ruled that the developers can resume work on the Pierhouse hotel and condo project. The Daily News reports that the "there’s no evidence that the construction breaches the terms of the deal, which was drawn up under former Mayor Michael Bloomberg and former Governor George Pataki." Supporters of the controversial project, including Brooklyn Bridge Park Corp., insist that "the construction is vital to the fiscal stability of the park, which is being financed through revenue from several real estate developments." Without the super-tall structure there would be no park. Not surprisingly, local residents "said they were disappointed by the court’s decision and by the behavior of Brooklyn Bridge Park Corp., which they say places the interests of private developers above those of park-goers and neighborhood residents." Who needs an eyeful of one of the world's most beautiful bridges when you can stare at yet another shiny glass and steel structure instead? 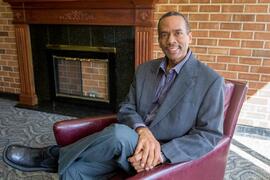 The Pros and Cons of Hiring an Owner's Representative

Adrian Griffith, the current president of the Ryerson Towers board, joined after the earlier capital improvements were already under way. The 326-unit Mitchell-Lama co-op in the Clinton Hill section of Brooklyn set out on a $3.5 million project to replace the windows and the boiler, do façade work, resurface balconies, and redo the roof. The 2008 loan for that work was secured from the city's Department of Housing Preservation and Development (HPD), which did not require the board to hire a construction manager. This time the loan — a refinancing of the underlying mortgage plus money for anticipated capital improvements — came from the city's Housing Development Corporation (HDC).