Written by Kathryn Farrell on September 11, 2013

Sugar Hill evokes mixed feelings in Albelisa Kemp, a project manager at Rand Architecture & Engineering. “It’s a beautiful district; there’s some really amazing stonework,” she says, while admitting to some disappointment: the historic district, located in the northern part of the Hamilton Heights section of Harlem, has also unfortunately seen a lot of deterioration over the years.

An exception to that trend is 470 Convent Avenue. The six-story, Beaux-Arts brick building is undergoing a façade, roof and window renovation. “The building is an icon,” board president Michael Davu says, noting that it was designed by architects Gross & Kleinberger and constructed in 1911. “People come to the neighborhood from everywhere, so we get a lot of foot traffic,” he adds. The property has eight commercial stores on an avenue that is otherwise almost all residential. 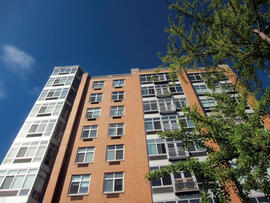 The Neighborly Sponsor: Peaceful Coexistence at the Dwyer Condominium

Though a sponsor or developer must, by law, turn over control of the condo or co-op board after 50 percent of the apartments are sold or five years have elapsed after the first closing, whichever comes first, we're all familiar with sponsors who overstay their welcome, creating refinancing obstacles and other lender issues, revolving-door rental tenants and other problems. But every once in a while, even in New York, things work out the way they're supposed to.

Recent news affecting co-op / condo buyers, sellers, boards and residents. This week, they do love their cigarettes in Queens, a Long Islander may face eviction for burning the wrong kind of firewood and Petey the Pig's "parents" are trying to sell their co-op apartment and fine a more swine-friendly place. There's a Harlem co-op / condo expo April 6-7. And where the wild things aren't is in the late Maurice Sendak's co-op, now up for sale. Plus, for condo and condo and co-op boards, we've advice on mediation.

Written by Tom Soter and Bill Morris on September 20, 2012

One can read about the specified duties of co-op or condo board officers but it's equally important to hear from directors themselves about what the jobs actually entails in real life. In the finale of our series "Board 101," three co-op board secretaries take a few minutes to tell you their experiences in taking a few minutes.

Recent news affecting co-op / condo buyers, sellers, boards and residents. This week, a Greenwich Village co-op board refuses to discuss why it's evicting a financially responsible doctor's family that's owned a Fifth Avenue co-op since 1985, and residents of Harlem's Riverbend co-op are asking why the board just re-upped a management company they say has let the place fall into disrepair. Plus, a co-op / condo insurance checklist, and when a building installs a noisy playground, apartments overlooking it are out luck.

... co-op maintenance fees and condo common charges may soon spike, a co-op to avoid in the hot Harlem market and, of particular interest for board, the latest in kid-friendly amenities and what are multi-condominiums and can their funds be mingled?