ADDING SOLAR ENERGY: HOW TWO SAVINGS-CONSCIOUS BOARDS DID IT

> ADDING SOLAR ENERGY: HOW TWO SAVINGS-CONSCIOUS BOARDS DID IT

Adding Solar Energy: How Two Savings-Conscious Boards Did It 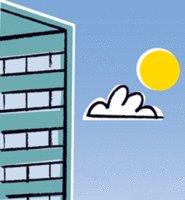 Solar power made sense for two apartment buildings on Manhattan's East Side: Kips Bay Towers Condominium at East 33rd Street and Second Avenue, and the co-op at 230 East 73rd Street. Although one arrived at it by accident and the other partly by design, each building is tapping into the sun's power as a part of overall efforts to control increasing energy bills, and each relies on government incentives and subsidies to justify the expense.

For 230 East 73rd Street, going solar began with an attempt to revisit the lighting in the hallways. A prewar, red-brick building of 89 units converted to co-op in 1987, the property — one of the six Eastgate buildings, completed from 1928 to 1936 — had hallways and a lobby that needed an overhaul. The board, led by 12-year president Hayden Schofield, undertook their renovation in 1998, installing a doorman station, upgrading the elevator cab from operator-run to automatic, painting the hallways and refurbishing the floors.

The budget, however, wasn't able to extend to upgraded hallway lighting, he says, though, "It was clearly very dim and not very attractive." When the original renovation needed a wear-and-tear upgrade in the mid-2000s, "One of our goals was to significantly improve the hallway light. Questions started to come up. If we were going to increase the amount of light, that meant an increased amount of power."

Schofield (right) researched how the property could add more light without more power cost and signed up for a full energy audit by the New York State Energy and Research Development Authority (NYSERDA). After hiring energy consultant Tom Sahagian, senior project manager of Power Concepts, the board began to uncover energy-saving opportunities.

On the list was a solar hot-water heater. Schofield admits to initial skepticism. "They produced this comprehensive report which had solar in it, and my view was, 'Look, we'll undertake the suggestion so long as the math works.'"

Math and cash are the two anchors needed to take control of your building's finances and make a stab at utilizing solar energy in the process. At Kips Bay Towers, the math and the cash added up when three events took place: The board switched to a forward-thinking management company, Cooper Square Realty, in 2005; it elected a new president, Mitchell Berg, who knew about the economics of real estate as a management executive at Maxwell Kates; and it heard new board-member Suzanne Musho's suggestion to explore solar.

Musho (at left) was born and raised at the 1,110-unit Kips Bay, a complex of two 20-story buildings on 7.5 acres between Gramercy Park and Murray Hill. Designed in 1961 by I.M. Pei and converted to condominium in 1981, the property obtains its fuel from Con Ed steam, and the costs, like steam's vapors, were rising.

Before solar had even been suggested, the board wanted to control costs by reining in its boilers. To that end, in October 2007, Kips Bay completed a boiler conversion from steam to dual-fuel. The nearly $1.9 million project had a payback of only three years, with savings of between $500,000 and $600,000 annually on fuel. It was financed with a 10-year, low-interest loan, subsidized by NYSERDA.

"We had the operating budget set up now and we were doing some smart things in terms of savings," says Berg. "But we only had about $700,000 in reserves. We had some leaks, we had to replace both roofs, we had the lobbies to do. So we were really looking at $3.5 to $4 million worth of capital expenditures. We decided we had to get creative."

The result was a restructuring of the condo's garage lease. From an annual return of $450,000, the board negotiated a 40-year extension to the remaining 15 years. In return, the garage tenant would make two payments of $2.5 million each, an additional $100,000 per year for the remaining term of the original lease, and a new payment formula tied to gross revenue (kicking in at the start of the new term). This money allowed the condo board the freedom to consider solar.

"The original idea was that we were going to supplement the building's electricity with solar panels," Musho explains. "How much it was actually going to generate was something we had to do research on."

The complex's engineer called in a solar expert, David Buckner, president of Solar Energy Systems, who reported that a panel array spreading out over the large roofs was impractical: The parapet threw off too much shade, while the fans and other mechanical equipment took up much space. What the buildings did have, though, were two enormous bulkheads, each with its own sun-catching potential.