OUSTING AN ENTRENCHED BOARD

> OUSTING AN ENTRENCHED BOARD

Ousting an Entrenched Board

In some co-ops and condos, the people serving on the board of directors turn out to be a lot like houseguests and cockroaches: Once they settle in, it can be devilishly difficult to get rid of them. But while it may be hard to dislodge an entrenched board, it is not, as Jennifer Gill learned, impossible.

Her story began to unfold in 2004 when Gill, a 32-year-old office administrator, and her husband, David Witzel, a web developer with Yahoo.com, quit renting and took the plunge into homeownership. They found a one-bedroom apartment in a well cared-for seven-story brick co-op at 225 East 76th Street. There was an awning out front, a marble lobby, a live-in super, and 43 apartments, all but five of which belonged to shareholders. The couple took a deep breath and plunged in.

A year-and-a-half later, Gill realized that the promised "annual" board meeting had not yet taken place. She got the runaround from the board president, Bella Wagner. The management company told her it was working on it.

As months went by and no meeting was called, Gill started noticing unsettling things. The co-op was on its third management company since she'd moved in. The live-in super, citing conflicts with Wagner, had quit and moved out. Whenever a board member quit, Wagner simply appointed a replacement. Perhaps worst of all, Gill learned that the roof had been leaking for at least a year and nothing had been done about it.

Although she didn't know it at the time, Gill was confronting the classic warning signs that her co-op was being run – and run into the ground – by an entrenched board.

Bad Board, Bad Board – What'cha Gonna Do?

"I really didn't want to get involved," recalls Gill, who grew up in tiny Oxford, N.C., and moved to New York 13 years ago. "But after the board president confronted me and told me I was being stupid and crazy, it upset me. I knew that, by law, we were supposed to have an annual meeting, and I wanted to see what we had to do to call a meeting and have an election." 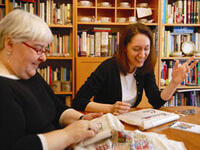 As it happened, Gill (near left) belonged to a needlework group also attended by attorney Theresa Racht (far left), a partner at Racht & Taffae who had taught a Council of New York Cooperatives & Condominiums seminar called "Breaking the Grip of an Entrenched Board." At Racht's suggestion, Gill steeped herself in the mechanisms for calling an election. She also took Racht's advice and invited neighbors to her apartment – discreetly – to see if anyone else had grievances about the co-op's deteriorating condition.

"Half of the shareholders showed up," Gill says, "and everyone in my living room was irate about this woman [Wagner]. It was bad, but it was the best thing that could have happened." Bella Wagner also appeared that night at Gill's door, uninvited, but was rebuffed. There was no turning back. This was war.

Gill and her confederates got busy. While pressuring Wagner to call an annual meeting, they put together a slate of seven disgruntled candidates (including Gill) and urged all shareholders to show up when a meeting was called, rather than voting by proxy, so they could hear the candidates speak. They also approached the building's sponsor, who owned five apartments and thus controlled a bloc of potentially crucial votes. They asked that he designate his proxy votes to the seven new candidates, and initially he agreed to do so.

Meanwhile, the atmosphere in the building became toxic. There were confrontations in the hallways, arguments, shouting matches. Mail started disappearing. Ethnic slurs were stuck to walls. "It was so evil," Gill says.