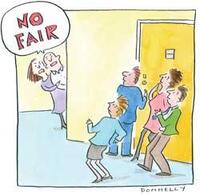 Lisa Aguilera del Puerto and Fernando J. del Puerto owned the shares allocated to Apartment 117 at the Port Royal co-op in Montauk, Long Island. In October 2001, they entered into a contract of sale with fellow shareholder Rita Toole to buy Apartment 217. Board member Kathleen Sagona allegedly told the del Puertos that the board would even waive the application fee for the sale, as it had allegedly done for another shareholder purchasing another unit. The del Puertos even had a buyer lined up for Apartment 117. What could go wrong?

As the couple later claimed in the lawsuit Del Puerto v. Port Royal Owners Corp., they witnessed a couple enter 217 even though the unit was under contract to them. The owner, Toole, confirmed no one was authorized to be in it. A guest of a shareholder, however, stated that he had witnessed a board member, Esther Ruiz, inform someone that she had shown 217 to Jack and Miriam Olivero.

The del Puertos reacted strongly. They claimed they were financially qualified to purchase due to their combined income of $300,000 plus "substantial equity in Apartment 117 and other assets." They also alleged that the board interviewed rival buyers the Oliveros despite the Oliveros not yet having signed a contract for the unit, which the Oliveros shortly thereafter purchased for $55,000, closing February 15, 2002.

Favoritism and Inside Dealing?

The del Puertos claimed that board member Ruiz or her boyfriend, Jean-Pierre Kerr, received a payment of $5,000 from the Oliveros, even though Kerr was not a licensed real estate broker and would not have been eligible for such a fee if del Puerto had purchased 217.

Del Puerto also asserted that Kerr had found a buyer for board member Sagona's apartment, thereby allowing her to purchase another unit in the co-op, and that Ruiz was a longtime friend of the Oliveros. Indeed, the del Puertos alleged that when the Oliveros demanded repairs be made subsequent to entering into the contract for 217, Toole threatened to terminate the deal — until a board member informed Toole's attorney that Toole was to continue with the sale of the unit to the Oliveros or else they would not approve any other purchaser she found or interview any prospective purchasers for three months. The board also allegedly stated it would fine her for renting the unit. Toole allegedly informed del Puerto that she was forced to accede to the board's demands as she "could not afford a legal fight."

The del Puertos further alleged that on October 13, 2002, Aguilera learned that Sagona had informed another shareholder that the board charged the application fee and denied their application in order to "teach Ms. del Puerto a lesson." The del Puertos claimed that the denial of their application constituted retaliation for del Puerto's opposition, in May 2001, to a proposed dog ban at the co-op, which, contrary to the wishes of Sagona, allegedly led to the grandfathering of pets then owned by the shareholders.

Sagona allegedly told Julia del Puerto at a board meeting that her application had been denied because del Puerto had tried to bribe the co-op into allowing her to purchase 217 by Fernando del Puerto's refusal to provide free legal services regarding the refinancing of the co-op's mortgage unless their application was approved.

In addition to all the above, the del Puertos argued that the board failed to treat them "fairly and evenly" by: (1) rejecting their application to purchase a second unit even though no other shareholder had ever been rejected with respect to such a purchase; (2) failing to interview them in conjunction with their application although all other shareholders were interviewed; (3) approving applicants who had worse debt-to-income ratios than theirs; (4) allowing at least one shareholder whose application was deemed deficient to cure their subject deficiency but failing to afford them the same opportunity; and (5) approving applications in incomplete form despite requiring a completed application from the plaintiffs. Moreover, the del Puertos claim that two of the four reasons cited by the board in support of their rejection did not appear in their credit reports.

In support of their motion, the del Puertos submitted evidence that three other shareholders had higher debt-to-income ratios and were nonetheless approved to purchase additional units at the co-op. They also submitted the deposition testimony of a shareholder confirming the alleged "personal animosity" of some board members toward them and the alleged payment by the Oliveros to Kerr, the boyfriend of Ruiz.