> BUILDING OPERATIONS > GAS LEAKS CAN CAUSE EXPLOSIONS. HERE'S WHAT TO DO WHEN YOU SMELL GAS

Generally, when you smell gas, you should call 911 or the utility company, and Con Ed urges its customers to report all potential gas leaks immediately. The odor, which is frequently described as smelling like rotten eggs, should be reported to 911. According to Con Ed, residents should evacuate until the FDNY arrives.

Property managers say shareholders should also contact them so they can send a plumber or the superintendent to supervise the response. This action, they say, may prevent an unnecessary shutdown in service. At the very least, they can inform residents about what is happening.

What Happens When Help Arrives

When the fire department or a utility company arrives, it uses special equipment to measure gas levels. If the gas is dangerously high, it is shut off until the leak is plugged. Pipes that are on the street are the utility company's responsibility to fix, but those in a building leading to gas meters are the building's responsibility, and a plumber must make repairs.

Before turning the gas back on, the utility company conducts tests on the pipes. Since many are old and more pressure is being applied than would normally be needed, pipes often fail this test.

"Pressure testing is a big issue, especially in a large building. You can have a tiny leak, but if you don't pass the test, they won't turn the gas back on, so you are at their mercy," explains Don Wilson, president of Blue Woods Management. 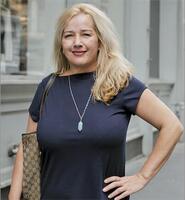 If the fire department doesn't detect a gas leak, but the odor persists, it pays to be persistent, according to Helen Mayers (right), a property manager with The Andrews Organization. In an incident at 35 Mercer Street, a seven-unit co-op in Soho, the FDNY initially cleared the property. "They came and used a gas [leak detector], but nothing registered. The following day, we got the report again and we brought in a plumber. We checked every pipe and we could not locate the source," recalls Mayers.

At Mayers's request, the FDNY and Con Ed returned as the smell got stronger, and they traced the leak to a corroded line that led to the street. Utility workers repaired the pipe and it was resolved within two days without any service disruptions.

Mayers's persistence paid off. "It was my responsibility to make sure this building was safe and determine what this odd smell was," she explains.

Adapted from "The Smell of Gas" by Kathleen Lucadamo (Habitat, September 2014)