> BOARD OPERATIONS > RESIDENTS HOTELING? TELL 'EM, "IT'S ILLEGAL, AGAINST THE BYLAWS, AND YOU'LL BE FINED"

Residents Hoteling? Tell 'em, "It's Illegal, Against the Bylaws, and You'll Be Fined"

"We sent a warning letter to every unit saying that the practice is illegal, it's against our bylaws, and anyone doing it will be hit with a $1,000 fine," says Patrick Kennell, condo-board president at The South Star condominium (photo below), who with the rest of the board was dealing with one remaining and relentless short-term renter, Sophie Grishanova.

They discovered that Grishanova had placed an ad for her apartment on Craigslist, and that she had asked the doormen to grant entry to more than 30 of her "friends" and "guests" and "family members." Most stayed overnight, for a weekend, or a week — but rarely the minimum of 30 consecutive days required by state and city law for a sublet (co-op) or a rental (condominium).

The board members sent Grishanova two certified letters, to no avail. Then they sent an email alerting her that she was being fined $1,000. They held a conference call with Grishanova, Kennell and two other board members. 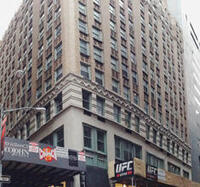 In December 2012, the board filed suit in state supreme court seeking an injunction. The court issued a temporary restraining order, giving Grishanova five days to evict three people staying in her apartment. The board installed surveillance cameras by the elevator on the 11th floor and instructed the doormen to keep a log of all unknown visitors; none of their actions stopped Grishanova.

She filed a countersuit, alleging harassment and defamation. She tried to make a tenant a co-owner of the apartment, but the board countered that she had failed to give them the required right of first refusal. And she tried to sell her apartment, but the board had put a lien on it for unpaid fines and common charges, effectively blocking the sale.

Was it worth it? "It was one of the most extreme examples of this process," Kennell says. "The litigation has been very difficult. It's unfortunate she wanted to turn it into a war, but I think we had no choice but to pursue it."