> BOARD OPERATIONS > CONVINCING 2,500 APARTMENTS TO GO DUAL-FUEL: ONE MANAGER'S CHALLENGE

Ronda Kaysen in Board Operations on September 10, 2013

Jacob enlisted one member from each of the co-ops to sit on a natural gas committee. Another sister co-op, Amalgamated Dwellings — one of four in the Lower East Side's Co-op Village — still used the same plant as Hillman and East River, and so a member of its board sat on the committee as well. Each month, the members would report back to their respective boards, keeping them up-to-date on the project.

"Heshey sets a good tone," says Howard Stern (not the radio broadcaster) a co-op board member at Hillman, who sat on the natural-gas conversion committee. "He can be tough when he needs to be, but he can also be thoughtful."

In 2001, Co-op Village converted to market rate from its origins as affordable, limited-equity housing rate. The decision dramatically changed the demographics of the community. What was once a complex made up largely of Jewish labor-union workers is today a mixture of elderly pensioners from that earlier era and young families paying market rate.

The transition to market-rate housing may have benefited many of the older residents who can sell their units for a windfall, but it has also created tension between the older residents who built the co-ops and now live on a fixed income and the younger ones who paid hundreds of thousands of dollars, if not millions, for their apartments.

"The two groups, their ability to pay for services and the amenities that they are looking for, are radically different," says Richard Valcich, a board member at East River who was board vice president during the time. "As a board member, I walk the fine line where you're aware of both groups."

In the case of the natural-gas conversion, it meant navigating divergent opinions about how to finance the project. Newer residents, concerned about long-term debt, worried about increasing the underlying mortgage; older residents with limited finances worried about the huge burden of an assessment. 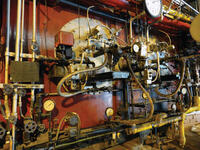 Ultimately, the co-ops decided an assessment would be too heavy a burden during difficult financial times. In September 2011, they refinanced their underlying mortgages, taking advantage of historically low interest rates. East River settled on a 10-year mortgage with New York Community Bank for $25 million. Hillman took out a $12 million mortgage. The interest rate on both mortgages is 4 percent for the first five years and 4.5 percent for the second five years. They include a provision to allow the co-ops to pre-pay up to $2 million a year, reducing their overall debt load.

The co-ops also avoiding paying Con Ed upfront for the gas line. Instead, they agreed to pay the utility company a premium on natural gas for a year to pay back its cost.

The returns have been dramatic so far. In the first year since the project was finished in May 2012, the co-ops saved $2.24 million in fuel costs, according to Karell. The co-ops received a $175,000 incentive payment from the New York State Energy Research and Development Authority (NYSERDA).