> BOARD OPERATIONS > BOARD SERVICE: JO ANNA ISAAK AND DAN O'CONNELL ON A CO-OP'S TREE REMOVAL

Jo Anna Isaak and Dan O'Connell, President and Shareholder, 329 W. 21st Street, Manhattan. One in an occasional series of real-life stories by board members about serving on co-op and condo boards. in Board Operations on August 18, 2011

The tree leaned more in the wind and heavy rain; its branches cracked in the night. Finally, it came to rest its massive weight against the wall of our adjacent building. Alarmed, the co-op board called in the tree experts. Our co-op requires competitive bidding when it comes to matters like this, and the three tree removal experts agreed, if not on price, then on one matter. It was, as one said ominously, "a dangerous tree."

Not only was the tree dangerous but, it seemed, so would be its removal. It would involve a lot of lines strung from adjoining buildings and the danger of the tree toppling into the neighbors' windows, with potentially considerable damage. Calls to our insurance company followed. The question of responsibility for this property maintenance arose: Was the tree solely ours, or possibly the co-op's responsibility? No consensus seemed near.

Whatever the legal situation, the tree had to be taken down — now. The scenarios presented to us by the various tree specialists ranged from a tree climber lopping off branches from top to bottom, to an alarming notion that we might need to bring in a crane, which involved closing off our street, police permits, and a bill of up to $15,000. A helicopter was mentioned.

Finally, we decided upon Savatree, a Westchester tree-removal service that we had used for many years to look after this tree. They proposed having one of their super-athletic tree climbers do the job. The next day, the tree removal crew appeared. After inspecting the tree and adjoining rooftops, they said they could do it. Doing it involved permissions from the adjacent buildings to sling lines across their roofs, and from our fellow co-op residents to rig lines to their fire escapes. 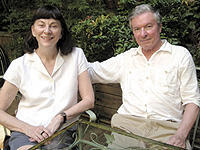 The crew was not taking any chances that the tree would go over when the branches leaning against our neighbor building were cut. Half-a-dozen large men clambered onto our roof and the two neighbor buildings, and the intrepid tree-cutter began rappelling down the side of the building on our west side, establishing cable lines. Spikes on his boots, and a gas-powered chainsaw hanging from his waist, this logger, as fine as any to be found in British Columbia, climbed to the top of the tree and began lopping off the smaller branches near the top.

Easy as One, Two, Tree

Meanwhile, we joined half of the residents whose windows faced the courtyard and watched in admiration. Some had had the foresight to tape the glass on their windows and take in their air conditioners since, as we were told, “"there will be damage."

As we watched in high anxiety, first the branches, then sections of the main trunk itself, began to fall into our yard from 50 feet up. This guy was good: he saw to it that the falling huge sections missed our plants. As the pieces hit the ground, his fellow tree demolishers carried them out to the street, where they were fed into a tree-pulverizing machine. The machine made a terrific racket, much to the delight of the schoolchildren in the school across the street, PS 11.

Amazingly, in about three hours, the tree was gone. All that remained was to cut it down to a mere nub, so that we could put some new deck over its remains. No damage, no complaints from the neighbors. We were so impressed with the work of the urban logger that we sent him a Christmas gift.

A side benefit of the successful removal is fewer leaves to sweep in the fall. The garden seems to be doing better this summer: more sun, and the big tree isn't eating all the ground nutrients any more. For the first time ever the dogwood tree – always previously in the larger tree's shadow — began blooming.

Still, time passes. And sometimes, in the mornings, we miss the birds that used to perch in the tall branches and the old elephant trunk.