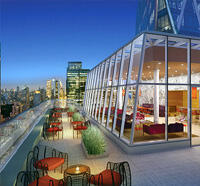 March 4, 2011 — Too many stories involving co-op / condominium sponsors or investors end up as cautionary tales. But the saga of The Sheffield turned out to be a fairy tale — and no less instructive to any other co-op or condo board dealing with sponsors, developers or investors who take over an ailing building. The moral: When both sides act reasonably, everybody wins.

"There's often so much contentiousness between board and sponsor," observes veteran real-estate attorney Rob Braverman, the managing partner ofBraverman & Associates, who represented the unit-owners. "But here there was a big problem for everyone, and everyone put their heads together, thought creatively, and put things together in a way that made sense."

"These guys" are the partners in Fortress Investment Group, a real estate investment trust that acquired the then-infamous Sheffield at auction in August 2009. Built in 1978 as a nearly 850-apartment rental building, it was purchased in 2005 by Kent Swig, president of Swig Equities, and two other major investors. Swig managed the building and oversaw its conversion to a condo called Sheffield57. And, for reasons covered extensively in the press already, the next four years were a fiasco. (Calls to Fortress for comment were not returned.)

Wagner, fellow owner Ju Rhyu and others, living amid construction hell, a lack of services, unpaid vendors, mechanics' liens and unfulfilled offering-plan promises, formed the Sheffield Owners Association. "We had a lot of meetings and mailings, a lot of standing around in the lobby making our little group available to the owners," Wagner recalls. "We tried to make it very clear how bad our situation was and what needed to be done. If the sponsor has no money, you can jump up and down all you want, but they're not going to give you everything. But there are legal remedies we can take to ensure that what can be done is done."

These roughly 70 unit-owners filed a lawsuit on May 1, 2007, and then met with representatives of the New York State Attorney General's office, which regulates co-op and condo conversions. As usual for such ad hoc groups created to fight a sponsor or developer, most but not all of the members themselves paid for the attorney and other professionals they had to hire.

"We explained [to all the owners] that unfortunately this is going to cost additional out-of-pocket [funds]," says Wagner, "but compared to the investment you already have in your building, this is a small amount, and we're not here to spend your money recklessly. It's human nature to say, ‘Why isn't everyone contributing?' but at least those of us on this committee were really focused and went forward with this. And Rob worked with us a little as well [on fees]. We all were trying to fight the good fight. I wasn't sitting there looking at my neighbor saying, ‘I can't believe this person didn't contribute.'"

I wasn't sitting there looking at

my neighbor saying, ‘I can't believe

By this time, the eccentric Swig — who had even a hired a marching band to try to drown out a condo-owner rally, and who had added seven fictional stories to the number of floors, leading to New York City Council bills to outlaw such practices — faced legal, economic and public-relations pressure, and was being sued by his own partners. He defaulted on his loans, and on August 6, 2009, Fortress acquired the building – at the time including 212 unsold units – in a fire-sale deal. Now what?

Aside from Fortress changing the star-crossed building's name back to The Sheffield, the new sponsor took the reasonable and logical step that many often ignore: The company actually spoke with the people living in the building.

At that juncture, says Wagner, the owners "indicated some of the issues that the building had, such as the fact that there was no board." And just two months later, Fortress held a general election. A Fortress representative became president of the nine-seat residential board, and Wagner, 55, a former CFO in the financial-services industry and now head of LJW Consulting, became vice president of and also served on the overall building board. (There is also a third, commercial board, handling the retail-business owners.)

Wagner remembers the board's first meeting: "We had a pretty long agenda, going over problems in the building. For example, our vendors [and staff] were not being paid, so we were on the precipice of losing everybody from doormen to porters and even having [the] fuel supply just being shut off," he says. "We were just making sure vital services were going to continue."

Next page: Would you buy that for a dollar? >>