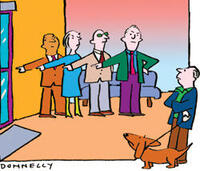 Nov. 16, 2009 — Given the difficulty of enforcing dog-prohibition policies, what can boards of directors do to control those dogs that are allowed in their buildings? And how should a board deal with a request for a reasonable accommodation? Two attorneys survey the latest developments and keep you up-to-date on the contentious issue in which emotion can trump what's best for the majority of residents, putting boards at risk.

by Dean M. Roberts, a partner at Norris McLaughlin & Marcus

Our cooperative clients, both regulated and market, have for the past few years been wrestling with the changing dynamics around enforcing the pet policies in their buildings. As is standard, our clients’ proprietary leases or occupancy agreements contain provisions that prohibit either pet, or, sometimes, more specifically, dog ownership in their cooperatives. The language varies from co-op to co-op, but the standard prohibition normally takes the form of a simple statement in the house rules, that dogs or, more broadly, pets are not allowed except with the consent of the co-op. Read more >>

One of the most frequent issues that has arisen today in cooperatives and condominiums is what to do when a resident requests permission to have a dog in his or her apartment based on an alleged medical necessity. Many co-ops and condos have house rules that prohibit dogs (among other pets). Unfortunately, most boards do not realize (and many do not want to recognize) there is one major exception to any such prohibition. Read more >>